Indonesian Interest in the Polar Regions

I received the Indonesian "Preserve the Polar Regions and Glaciers" issue the other day and there are two things about it I found interesting. The first was just the fact that there is an Indonesian issue in this series. As it turns out, they have participated in expeditions to Antarctica in the past:

The other thing about this issue that interests me is that it looks identical to a 2007 issue entitled "Melting Ice". It's the same stamp sheet. Same image with the polar bear and a tear in its eye. Even the same stamp denominations. The differences are the year, title and inclusion of the "preserve the polar regions" logo. 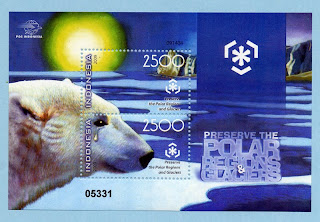