Here is the Swedish side of the joint Sweden-Canada issue Marine Life. 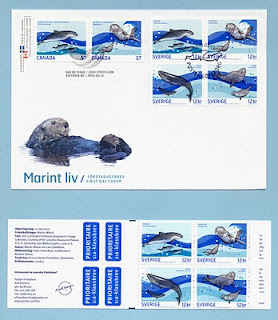 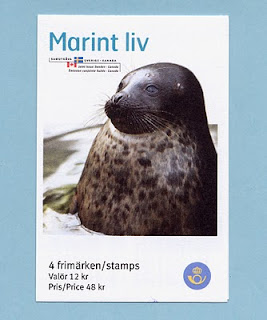 Canada Post has issued a joint commemorative stamp issue with Sweden about Marine Life. The stamps were deigned by Martin Mörck and engraved by Lars Sjööblom. The two Canadian stamps feature Harbour Porpoises and Sea Otters. The Swedish issue consists of four stamps, two of which feature the same animals on the Canadian stamps. The issue consisted of a souvenir sheet and an 8 stamp booklet. The booklet is gummed which is something Canada Post has not produced since 2004. The perforations in the booklet also include elliptical perforations which is a common thing in Swedish gummed coil and booklet issues. It was nice to see Canada Post doing an engraved issue. Even better that it was a joint issue with Sweden. 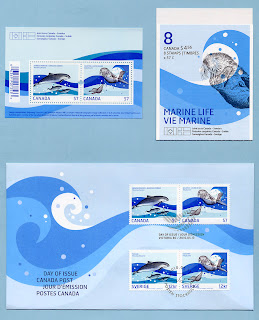 A Little Late for Christmas

Received this cover back from Greenland the other day. The "Santa Claus" cancel was available at the Greenland Post philatelic center during December 2009. I sent this to them sometime around the end of October. The cancel says 31 December 2009 and it arrived in Canada on 4 May 2010. So where did it get held up? I suspect it didn't get cancelled in Greenland on 31 December but instead was either delayed getting there or was misplaced and actually cancelled much later - perhaps even a few weeks ago. Mail between here and the east coast of Greenland can be a little slow in the winter but it's not usually that slow. At least once this year I've purchased stamps from Greenland Post and they arrived within a month of placing the order. 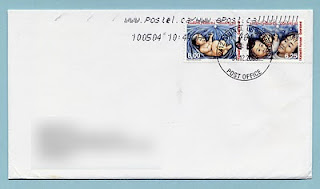