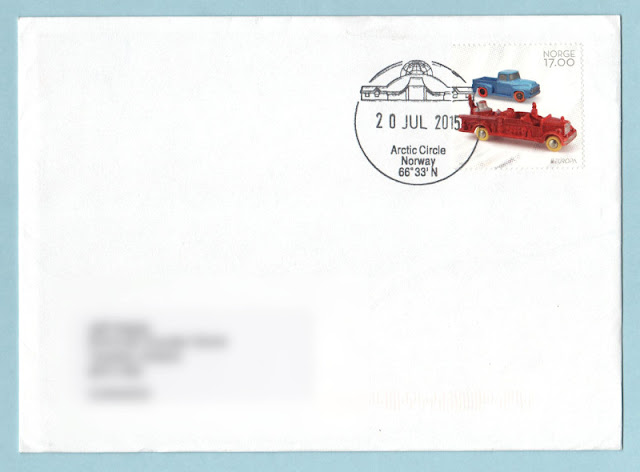 The Magna Carta was a charter that defined the relationship between the king and his subjects and at its core, states the nobody, including the king, is above the law of the land. The Royal Mail's Magna Carta 800th anniversary stamps feature text from the document and other international declarations and documents that were derived or inspired from it. 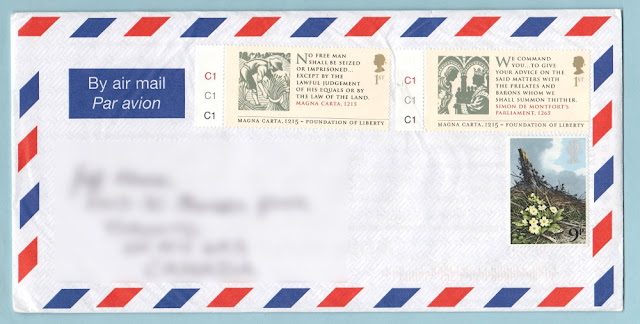 The stamp on the left has text from the initial 1215 sealed version of the document. This is one of the few remaining clauses from the original document that is still a law and it basically says that all men have a right to fair justice.

The stamp on the right is a quote from a 1265 summons to de Montfort's Parliament. Simon de Montfort seized power in England in 1265 but he didn't have a very good grip on it. To stabilize his power he formed a parliament and summoned representatives to discuss reforms with the hope that he would gain the support of the broader population. This was the first English parliament, held at the Palace of Westminster in London.
Posted by Jeff at 9:21 PM No comments:

Tromelin Island: a few hundred kilometres east of Madagascar. Lots of sand and brush and a weather station with a postmaster. A popular nesting place for sea birds and sea turtles. 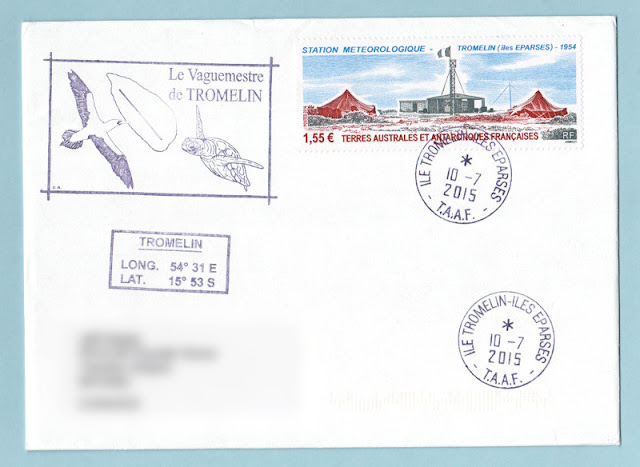 Like the 2016 Olympic transition stamps issued by Brazil this year, these Paralympic stamps were printed in 2012 but due to a licensing dispute, were held off sale until earlier this year. I almost thought these were the same stamps until I noticed the Paralympic logo. 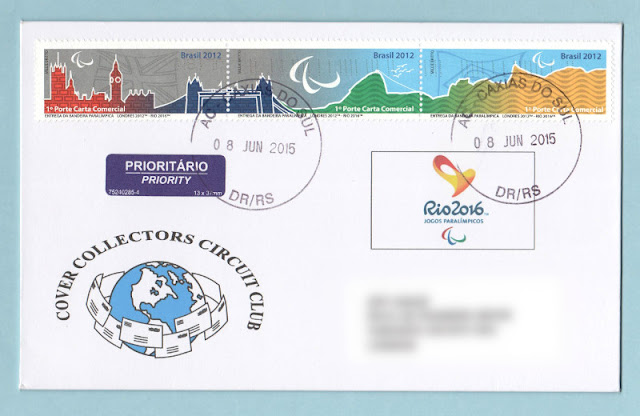 Last year Greenland Post stopped producing maximum cards. They used to do this for each stamp issue and they also sold the postcards separately. I don't think they were moving enough of them to justify production costs. There were a few postmarks for places in north-east Greenland that I wanted to acquire so I figured maximum cards would be an interesting way to get them. Greenland Post still has lots of postcards available for sale. Of the three stamps I chose, only one was issued after they stopped producing maximum cards. Instead of taking chances on finding postmasters in these remote locations, I had Greenland Post apply the postmarks for me (btw, they charge a handling fee for this). They keep copies of all handstamps used at the post offices in Greenland. 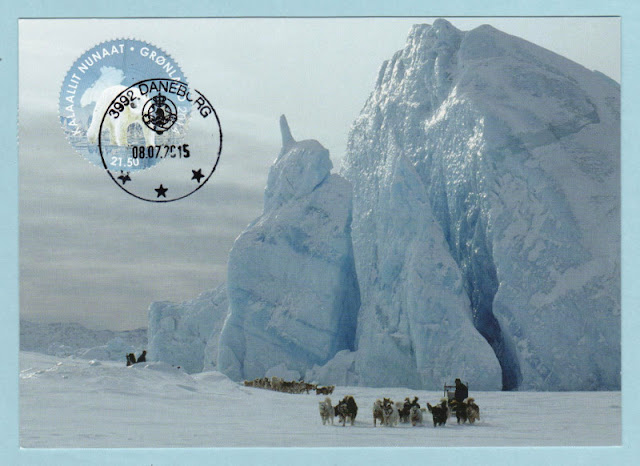 Daneborg station is on the south coast of the Wollaston Foreland peninsula and is home to the SIRIUS patrol: the dog sled patrol operated by the Danish navy. I used a stamp that was issued in 2014 as part of a joint issues with the Ross Dependency. The postcard was used for a previous Greenland SEPAC issue. 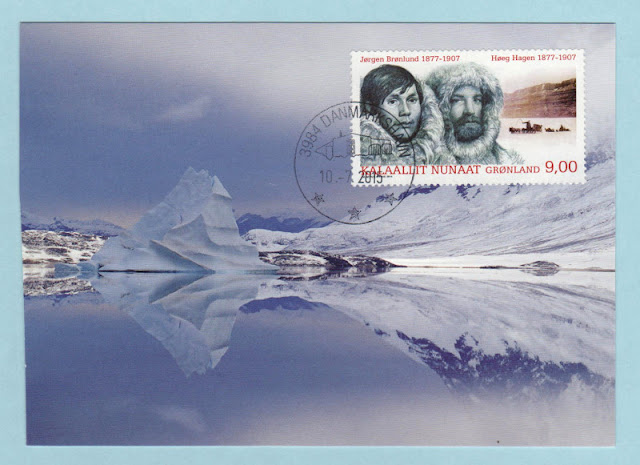 About 40 km to the north east of Daneborg is the weather station Danmarkshavn. It is the furthest north non-icebreaker vessels can travel along Greenland's eastern coast. For this card I used the 9 DKK stamp from the Expedition XII stamp issue and the corresponding postcard that was originally used for this stamp's maximum card. 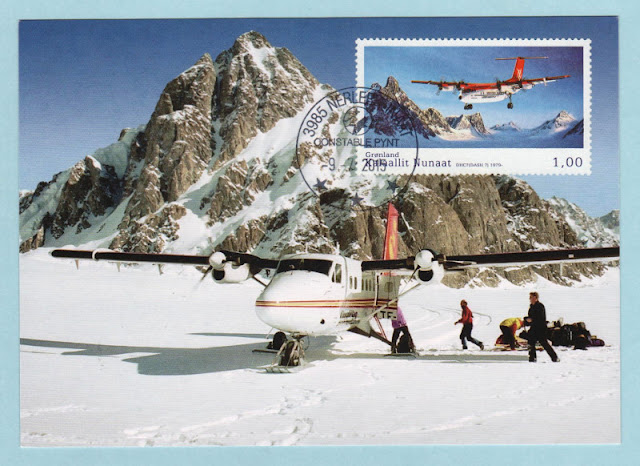 To the south of the Northeast Greenland National Park is Nerlerit Inaat Airport (aka Constable Pynt) which is located about 40km from Ittoqqortoormiit. The airport serves as a transportation hub for expeditions into the park to places like Daneborg station. The postcard I choose was used for the 2014 Aviation III issue showing a Twin Otter but the stamp is from the 2014 Aviation IV issue and features a Dash-8. Not the best postcard for showing off the postmark but I wanted to keep with an aviation theme.

Heredia is a few kilometres north of the capital San Jose and home to the largest university in the country: the National University of Cost Rica. A great cover with a nice selection of stamps. Thank you very much Erick!

Sanikiluaq is a small Inuit community on Flaherty Island in Hudson Bay. I recently watched a documentary about the people of Sanikiluaq and their relationship with the changing environment of Hudson Bay. They recently re-opened a small factory that processes eiderdown. 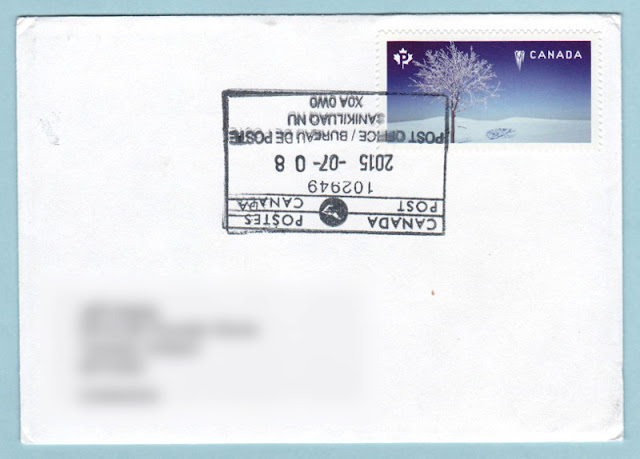 Eiders ducks use their down to line their nests so the Inuit harvest a small amount of down from the nests before the eggs hatch. The down is cleaned at the factory and sewn into the linings of parkas and duvets. Each nest yields about 70g of down. It doesn't sound like much but eiderdown is very expensive, selling for $330/kg.

To bad about the upside down postmark, but at least it was a good one. Here is it right side up, with a bit of Photoshop manipulation to bring it off the envelope. 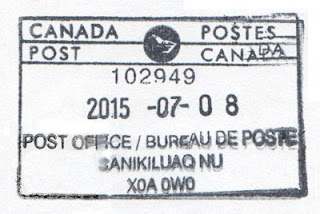 From Trenčín in western Slovakia. The stamp commemorates the 550th anniversary of Universitas Istropolitana in the Slovakian capital Bratislava. The envelope was produced to commemorate the first assembly of the Eastern Slovakia ZKF in Poprad, Slovenia on 23 May. 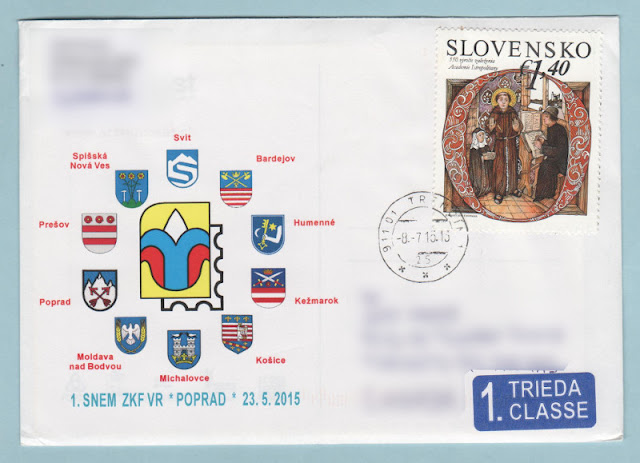 Managed by the British Antarctic Survey and funded by the Natural Environment Research Council (NERC), the UK Arctic Research Station in Ny-Ålesund is a seasonal research base for conducting environmental research in the Arctic. I sent this to the base four years ago and just got it back this week! Drumheller is a town in southern Alberta in an area known as the badlands. It looks like the sort of place you'd expect to find dinosaur fossils and sure enough, there are lots of them there. Drumheller is home to the Royal Tyrrell Museum which houses Canada's largest collection of dinosaur fossils. 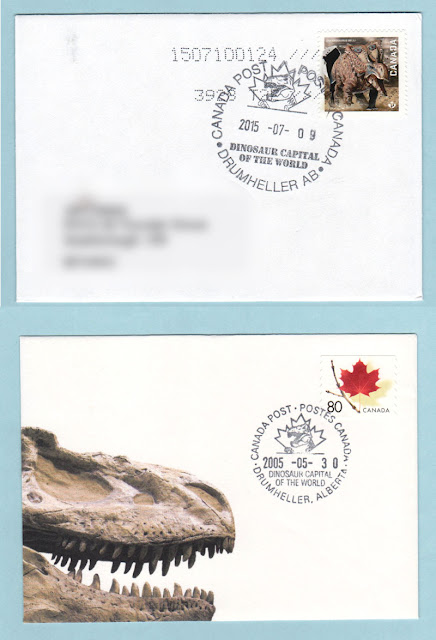 Quite a few post offices in Canada have special pictorial postmarks available. Canada Post occasionally updates the list of postmarks on their website but for the past few years, updates have been sparse. Over time, some of these hand stamps ware out, become damaged and even get stolen/ So it's hard to tell if a postmark you see listed on the Canada Post website is actually still in use. After comparing this recent cover from Drumheller to one I made 10 years ago, it's obvious that this postmark gets enough use to have justified a replacement. The newer postmark is larger and the fonts are different.

These stamps were issued to represent the transition of the summer Olympic games from London to Rio de Janeiro. The stamps were printed in 2012 but due to a licensing dispute, were held off sale until earlier this year. 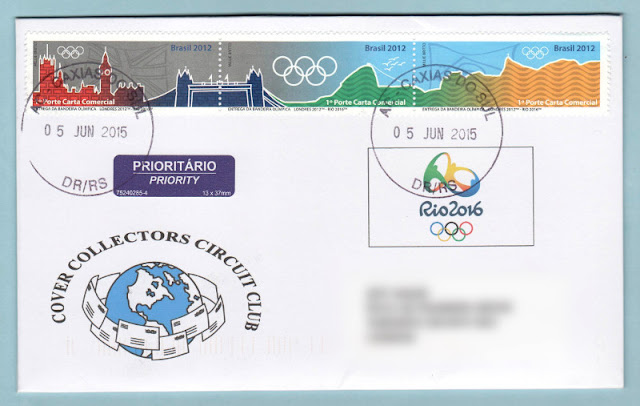 From Shizuoka, Japan. The postmark on the right is one of several city landmark postmarks available in Shizuoka. This one is of an Exhibition Hall in Oguro, with Mount Fuji in the background (I'm pretty sure you can't actually see Mount Fuji from the entrance to the hall). The New Year stamps on this cover are lottery stamps. In addition to the usually New Year stamps issued each year, special stamps are also produced with lottery numbers on them. Early in the year, Japan Post draws numbers and awards prizes for lottery winners. 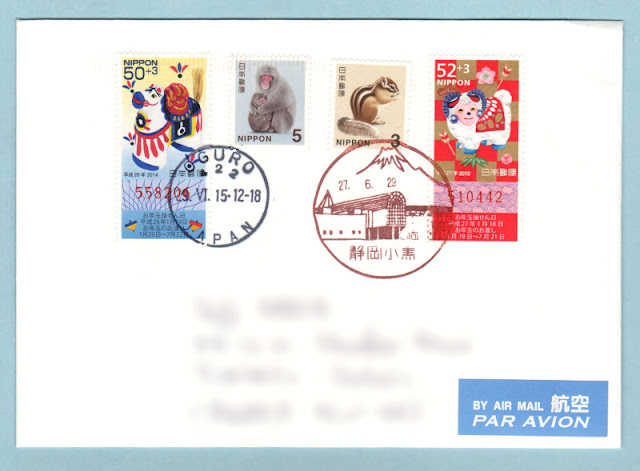 This was sent to me on 8 June from Buenos Aires and at the time their international letter rate (small, simple) was $29 pesos. A little less than a month after this was sent the rate was increased to $37 pesos. That's expensive. It costs me half that amount to mail a similar letter internationally from Canada. Postal rates in Argentina seem to have gone up a lot lately. I was planning to send some covers to Argentine Antarctic bases this year but when I saw the postal rates I decided against it. 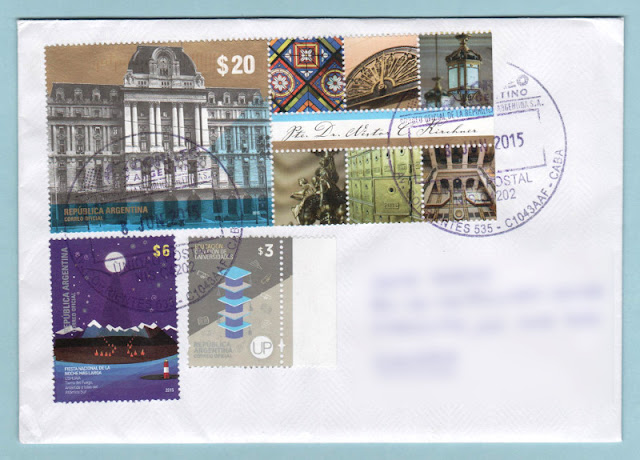 The large stamp shows the Néstor Kirchner Cultural Centre which opened in May of this year. Named after former president Néstor Kirchner, the building used to be an old Post Office before being turned into the largest cultural center in Latin America. The $6 stamp is from the "festivals" series: "Fiesta Nacional de la Noche Más Larga". The day of the longest night being winter solstice in the southern hemisphere. And I believe the last one is a "regular use" issues from 2014... something to do with graduating from University.
Posted by Jeff at 9:59 PM No comments:

The stamps on this cover were issued by Post NL in 2014. They are from a sheet depicting wild orchids that grow in the south of the Netherlands in an area known as Gerendal. A description of each orchid appears in the sheet margins. Too bad there is no postmark :( 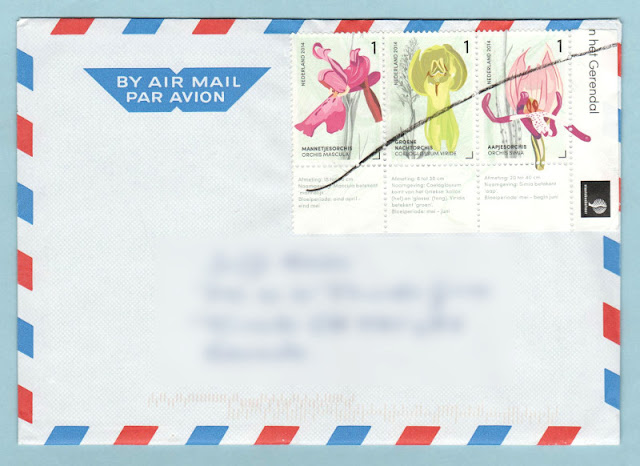 From Gütersloh in northwest Germany, featuring the recently issued 2015 lighthouse stamps. Deutsche Post have been issuing stamps in this series every year since 2004. Both of these German lighthouses are on lakes. The Moritzburger lighthouse sits at the end of a jetty the juts out into the Grand Pond: one of the ponds that makes up the Moritzburger Pond area near Dresden. It's really just a decorative lighthouse, constructed to mark some historical event. 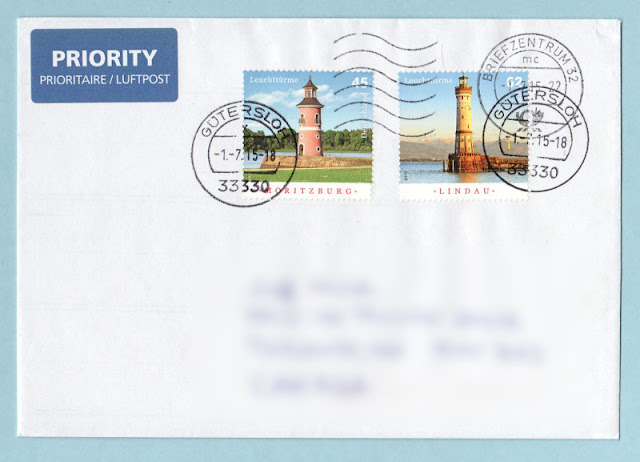 The Lindau lighthouse sits at the entrance to the Lindau harbour on Lake Constance in southern Germany. I've actually been to Lindau and have seen the lighthouse there. It was quite a while ago but when I was there I took this picture. In fact, it's currently my computer desktop image. The city on the other side of the lake is Bregenz, Austria. 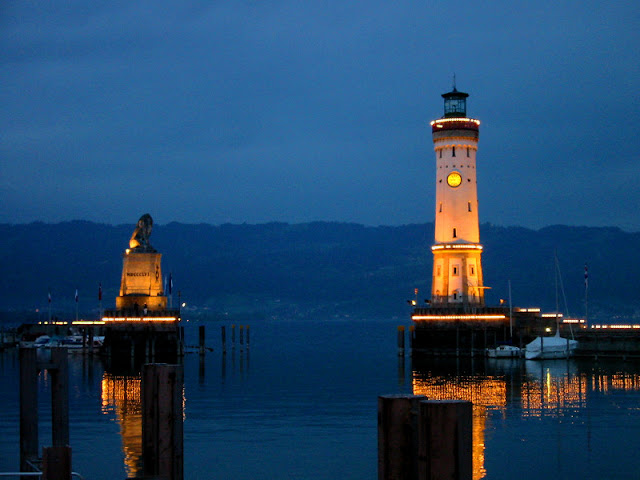 I can just barely make out the characters for "Lijiang" in the postmarks. Lijiang is a city in southwestern China in Yunnan province. It is known for its "Old Town" which is a UNESCO World Heritage Site. 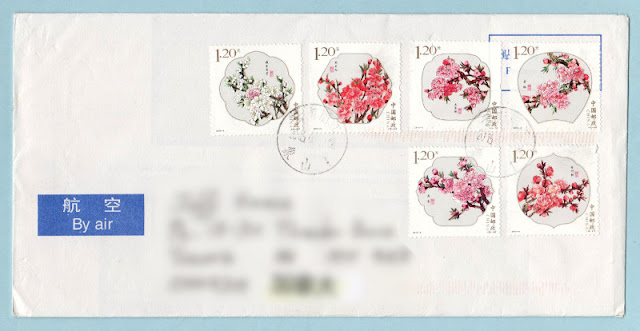