TAAF - Kerguelen and the Marion Dufresne

I received this today from the TAAF sub-antarctic island of Kerguelen. It was recently carried there (and probably back again) by the Marion Dufresne during its second rotation of the year. 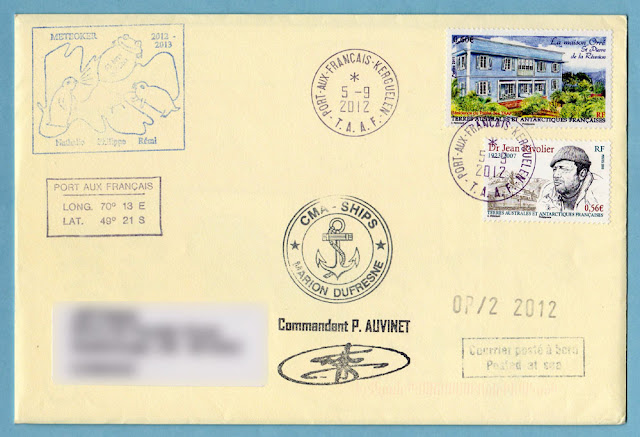 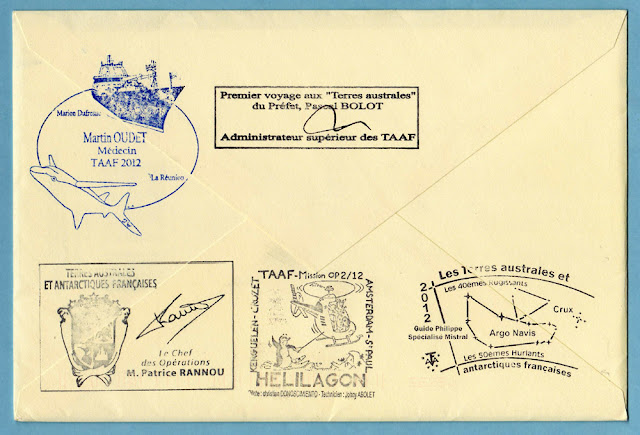 This aerogram from Kenya features an image of the Kenyatta International Conference Center in Nairobi. And the stamp at top-right is of the UN offices at Nairobi which includes a green building that is carbon neural, using solar panels to generate all of its energy needs.

Thanks for sending this to me Bhavin. It was much appreciated. I rarely receive aerograms like this.
Posted by Jeff at 8:17 PM No comments:

This commemorative postmark from Baltimore commemorates the War of 1812 and the American national anthem, The Star Spangled Banner, which started life as a poem written during the war. The poem was written by Francis Scott Key who, while being held captive, witnessed the British attack on Fort McHenry on September 13, 1814. He literally saw a small American flag that was flying above the fort survive an overnight bombardment and he decided to capture the imagery in a poem he titled "The Defence of Fort McHenry". This would later turn into the American national anthem. 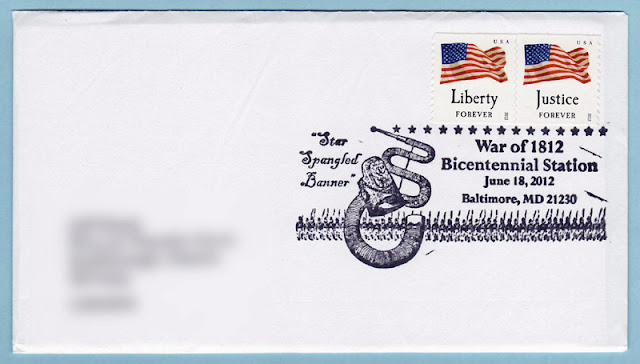 Between June 13 and 19 of this year, a festival was held in Baltimore to honor the anthem and the war. The plan is to make this a three year celebration, with further events planned for 2013 and 14.
Posted by Jeff at 9:53 PM No comments:

Stamps from the second issue in Australia Post's four part AAE Centenery series. This time a numismatic cover was issued that includes 3 of the 5 stamps and a $1 Sir Douglas Mawson coin. 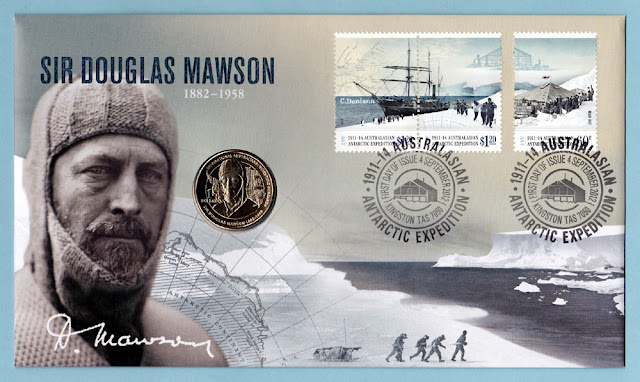 Thank you Martin, for this cover with the Polar Post Exhibition 2012 postmarks on it. The exhibition was held in Schwarzenberg on the 8 and 9th of September 2012. 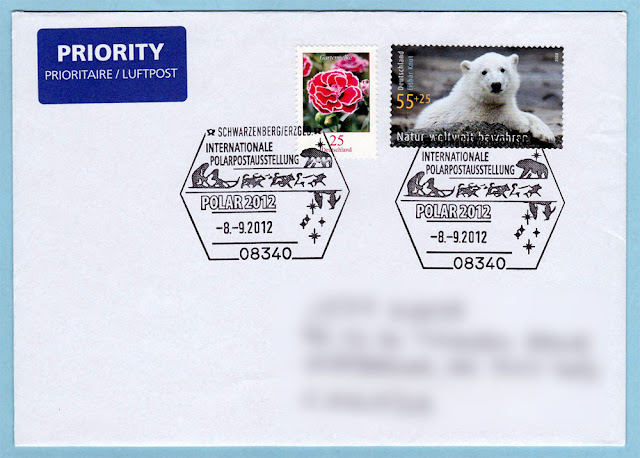 South Africa, The Transit of Venus

This scan doesn't do the stamp justice. The lettering on the stamp is done with redish-orange metallic print which looks great. I assume all the graphics on the sheet around the stamp explain how the transit of venus is used to calculate the distance between the earth and sun. 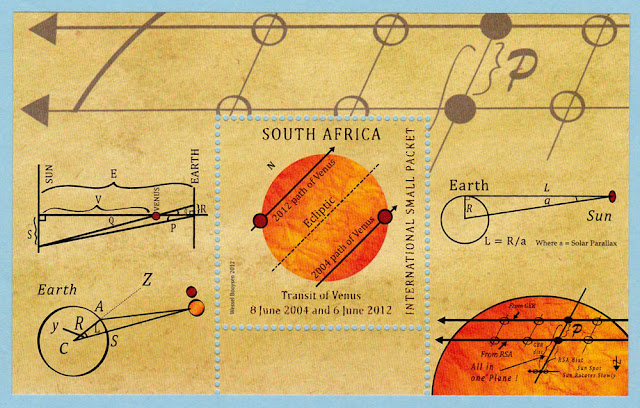 The postmark on this cover commemorates the 200th anniversary of the war of 1812. On September 12, 1814, a decisive battle was fought against the British. The had landed a large invasion force at North Point with plans to take over nearby Baltimore. But they were met by American forces who delayed the attack on Baltimore, giving the Americans time to prepare for and successfully defend it. 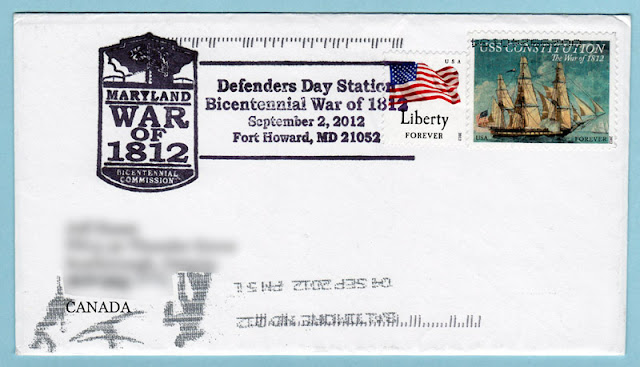 Defenders Day is a holiday in the state of Maryland to commemorate the battle at North Point. Today, Fort Howard occupies the original battle site. They re-enact the battle every year and this year they did so on September 2.
Posted by Jeff at 7:34 AM No comments:

This was postmarked in Christchurch and the postmark has an image of the Christchurch Cathedral on it. Despite surviving several earthquakes in the past, the last big one to hit Christchurch in 2011 seriously damaged the cathedral and the decision was made to demolish the entire structure and build a new one. 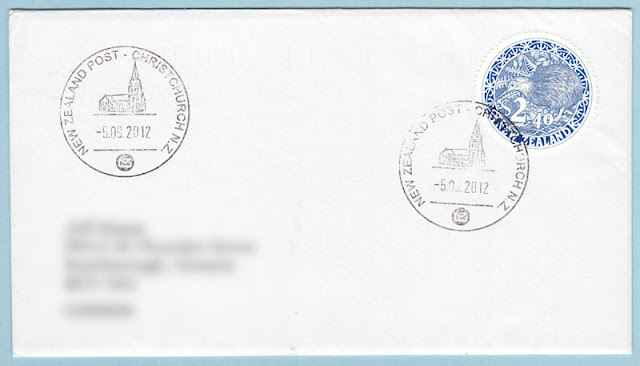 The stamp on this cover is a round kiwi definitive. New Zealand Post has been producing this for a number of years now. Different colours and denominations are used every year.
Posted by Jeff at 1:08 PM No comments: 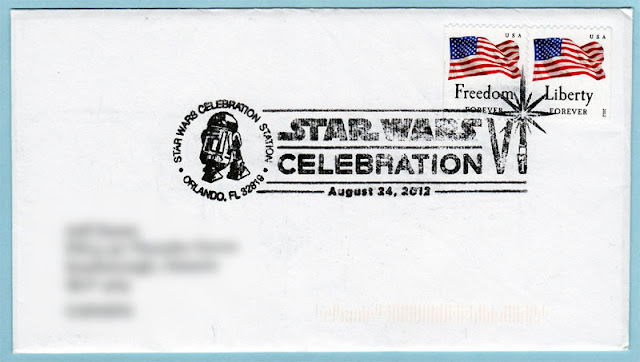 This is the result of my attempt to get maximum cards made using the recent "Welcome to London 2012" stamps from the UK. I sent two cards to Tallents House for the official first-day postmark and the other two I send to the London Special Handstamp Center  for alternative first-day postmarks. Results were mixed.

This first card was my favorite before I even sent it out for postmarking. Lots of noise free space for the postmark and the card had a matte finish so the postmark stuck to it real nice. 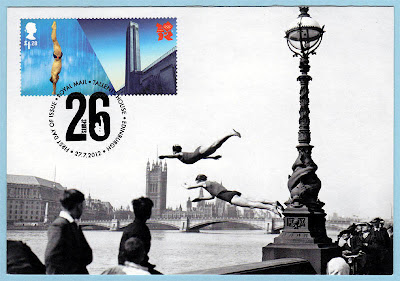 This card had a gloss finish and resulted in a not so perfect postmark application. And the stamp is starting to lift off the card significantly. I should have asked for the postmark to be place a little lower. And the card itself is a little too busy. Still, not bad. 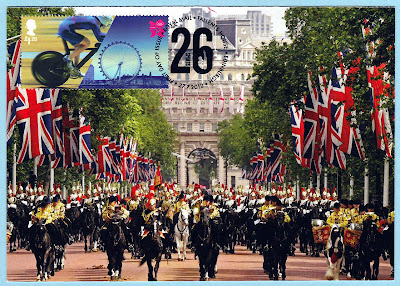 I really wanted this one to work. The picture on this card is from the last Olympic games held in London in 1948. The postmark is rotated 90 degrees which isn't what I wanted. This was an alternative first day postmark for this stamp issue. The card has too much noise in the background though and makes it very difficult to make out the postmark. I should have sent this to Tallent's House for the official postmark. Would have looked better and maybe the postmark would have been applied properly. 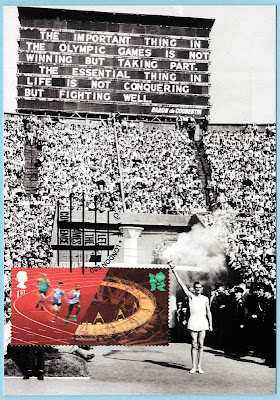 I laughed when I saw this one. Where's the postmark? I had extra postage on the back of this card and that's where it was postmarked even though I had fairly simple instructions attached to the back of the card, and a drawing of where to place the postmark. This was the first day postmark used for the coin cover that was issued along with the miniature sheet FDCs. 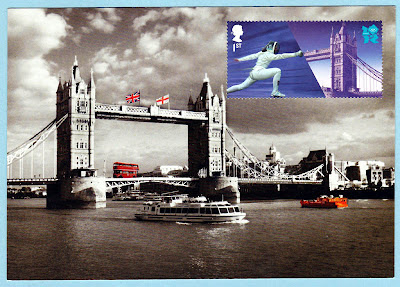 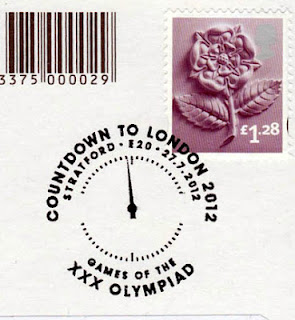 Despite what must have been a really busy month for the Tallents House postmarking team, they did a fantastic job with my cards. The London SHC can put down a pretty good postmark but I think they were a little busy to get it right for me. Maybe the next set of postcards will turn out better.

A little cover from Jan Mayen in the Arctic Ocean. Jan Mayen is a tiny volcanic island between Norway and Greenland and north of Iceland. It's part of Norway and is home to a weather station and an old LORAN-C radio station. The only people living on the island are the staff manning the stations. Most of the island has been designated as a nature reserve. 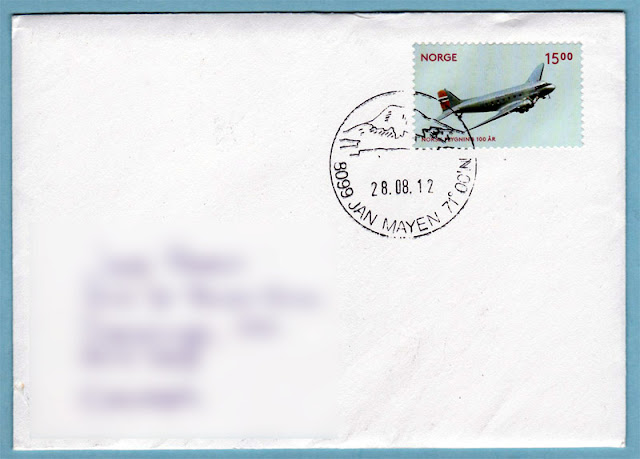 A postmark to commemorate the successful landing of the Curiosity Rover on the surface of Mars at Gale Crater on 5 August 2012. Postmarked in Pasadena, California. 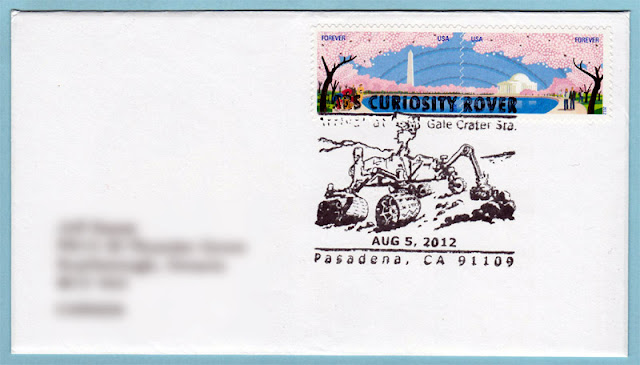