These are two covers that were retuned to me from Norway today. Tromsø located at 69°40′N 18°56′E is the largest city in North Norway. Ny-Ålesund located at 78°55′N 11°56′E on the island of Spitsbergen in Svalbard, Norway is one of the worlds Northern most settlements. 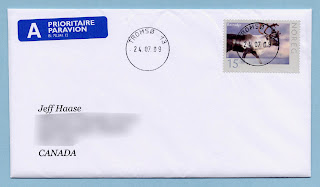 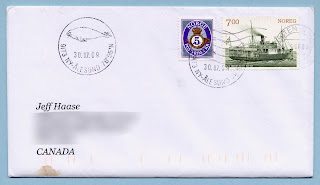 Sometimes countries issue stamps featuring popular themes just as a way to attract collectors and generate revenue. Small countries issuing stamps featuring US presidents or space missions for example. So I though this might be a similar case with Azerbaijan’s “Preserve the Polar Regions and Glaciers” issue. But I was very wrong. Apparently they sent an expedition to Antarctica that reached the South Pole 26 January 2009 and have plans to build a base on Antarctica someday as well. 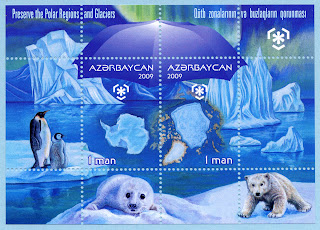 Received this cover from Svalbard Norway today. It was post marked "Tempelfjorden". The Tempel Fjord is about 60km East of Longyearbyen. In the winter a schooner, the Noorderlicht, remains in the fjord icebound and acts as a tourist stop for people on dog sled or snow mobile tours out of Longyearbyen. On the ice next to the ship is a mail box where tourists can mail post cards. Apparently the mail is transported back to Longyearbyen by dog sled, hence the "Polar Dog Mail" cancellation mark.

I received this cover in July when the ship is not frozen in the ice. Was my cover post marked at Tempelfjorden? Not likely. My guess is that it was actually cancelled in Longyearbyen since that's where I originally sent it to. 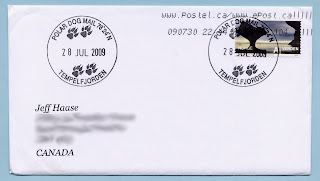