To commemorate the war of 1812, on 18 August USPS issued a stamp featuring the USS Constitution. The Constitution is the worlds oldest commissioned navel vessel. It was built in Boston Massachusetts and launched in 1797. 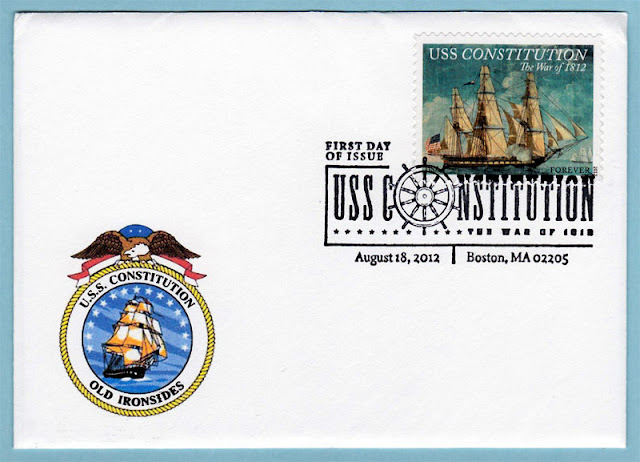 The Constitution was retired from active service in 1881 and designated as a museum ship in 1907. Recently she was taken out to sea to sail under her own power to mark the 200th anniversary of her battle against the Guerriere. 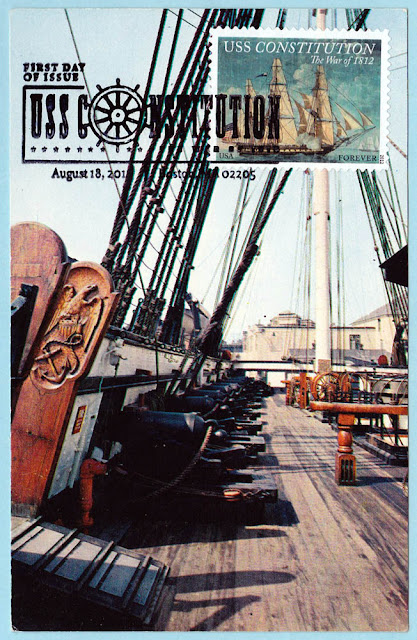 I'm really happy with the way this maximum card turned out. It's a fairly old card and quite a bit smaller than modern postcards so I was rather limited when it came to placing the stamp and postmark. The postmark was placed exactly where I wanted it and it's quite clear, even with all the 'noise' in the image caused by the mast rigging. This was my first time requesting first day postmarks from the USPS and I'm very pleased with the results.
Posted by Jeff at 7:21 PM No comments:

Stamp Day in France: 118 cities participated in the festival held 13-14 October including Nantes which is where this cover was postmarked. These stamps were issued 13 October and the theme this year was fire.  Merci François! 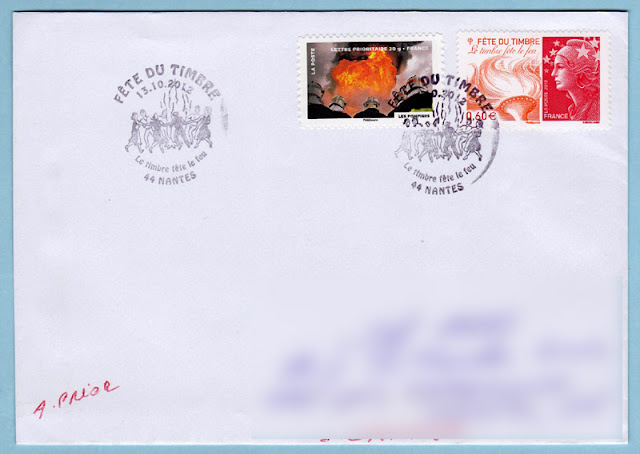 I've always liked stamps featuring images of marine life. I recently acquired this set from the Faroe Islands that was issued earlier this year and shows sea anemones that can be found in the waters around the islands. 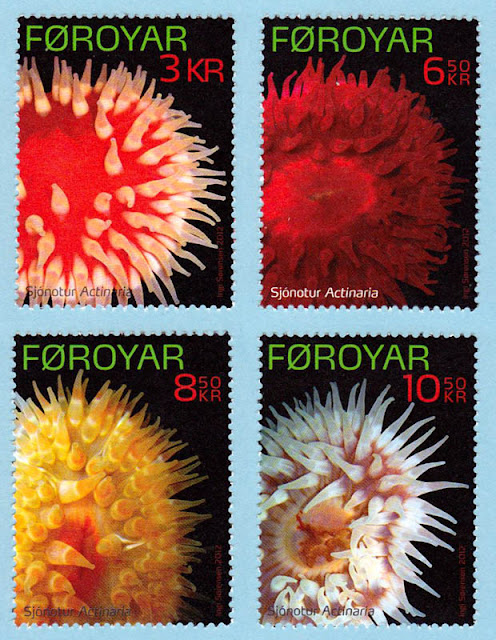 Three postmarks on this cover. The obvious one is the postmark commemorating the 75th anniversary of the Timberline Lodge near Government Camp, Oregon. Another in red ink is the Government Camp postmark (97028). And the third is the Portland Oregon spray-on machine cancel.

Another great Kenyan aerogram from my good friend Bhavin. The stamp image on this one is of the Pillar of Vasco da Gama in Malindi which commemorates the landing of Portuguese explorer Vasco da Gama at Malindi in February 1498. On the back is an image of Fort Jesus in Mombasa. 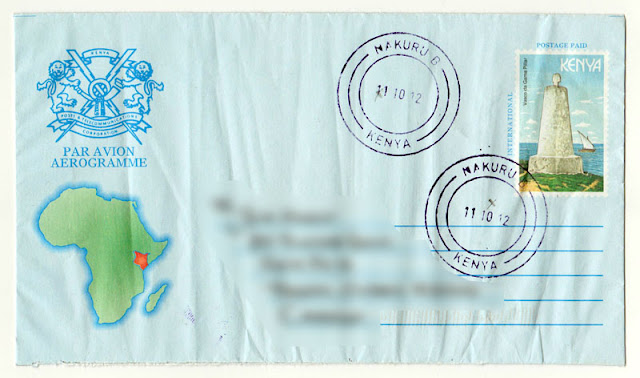 It got a little crunched up in the mail somehow but is fine otherwise. Nice clear postmarks though. 11-10-12 Thanks Bhavin!
Posted by Jeff at 10:46 PM No comments:

Some fauna stamps from Brazil: a Moorish Cat and an Ocelot and a cute little Leporinus macrocephalus which would make a tasty snack for one of those cats. 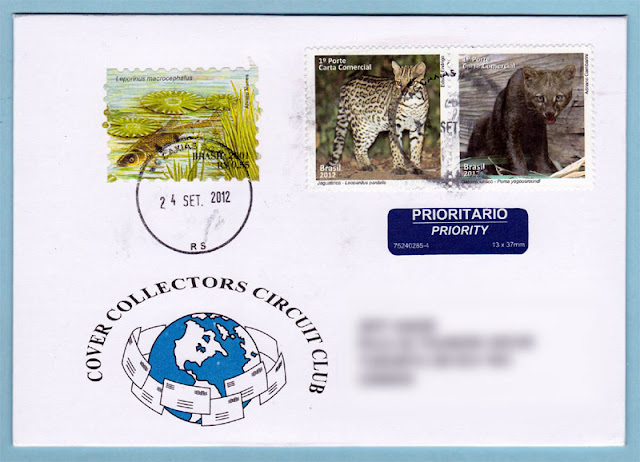 This is a first day cover for the Billy Wilder stamp that was part of the Great Film Directors set issued 23 May of this year. Also on the cover is the John Huston stamp. US Forever stamps are good for domestic postage which is currently $0.45. The current USPS rate to Canada is $0.85 so another forever stamps was necessary. 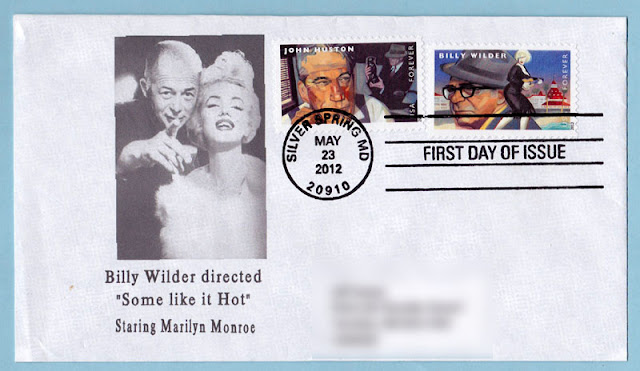 This cover from Bermuda was posted at the main mail processing center in St George's. Apparently it's the oldest continuously inhabited English town in the new world.  It's the hub for mail processing on the island, located right next to the airport. 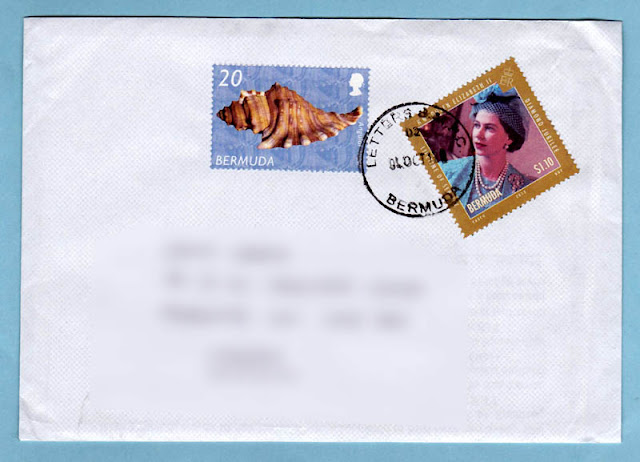 More UPAEP mailbox stamps from last year. I particularly like the Peruvian stamps. 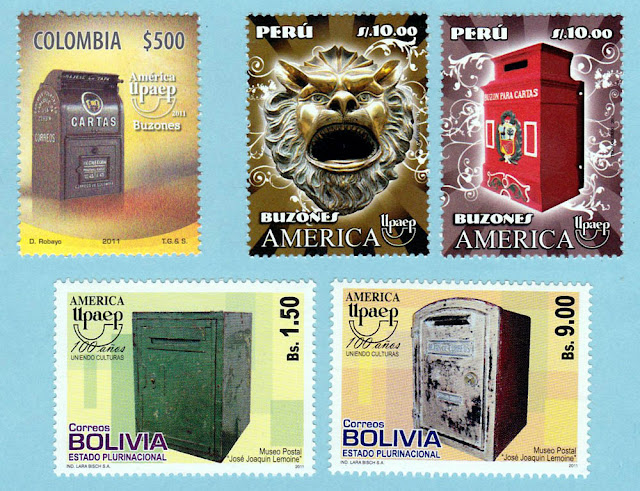 This is from the meteorological station on Hopen Island (part of the Svalbard archipelago). This cover had a rough journey. At some point is was soaking wet and started falling apart at one end. But somehow it managed to find me. 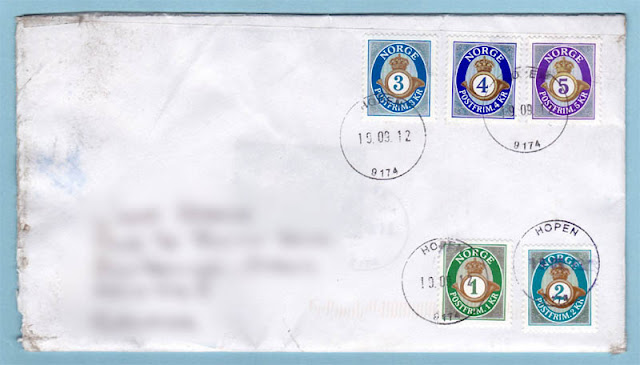 This cover from Bhubaneswar has a pictorial postmark but the ink isn't quite right and it's hard to make out. Bhubaneswar has a rich architectural heritage so I'm going to guess the postmark is perhaps the Lingaraj Temple? Difficult for me to say. Otherwise, it's a great postmark. 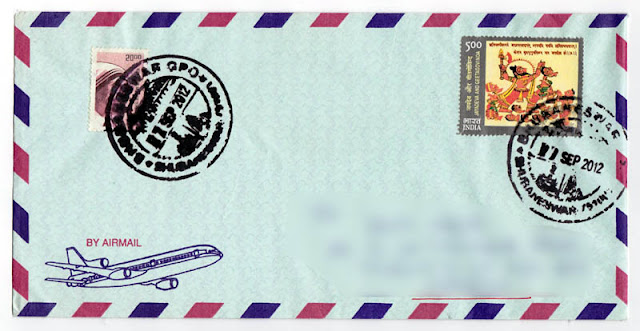 Lake Clear is a little town in New York state, a little over 100km south of the Canadian border and the city of Conrwall, Ontario. The sender of this cover has a mailer's postmark permit which allows them to cancel their own mail with their own postmark and add it to the mail stream. 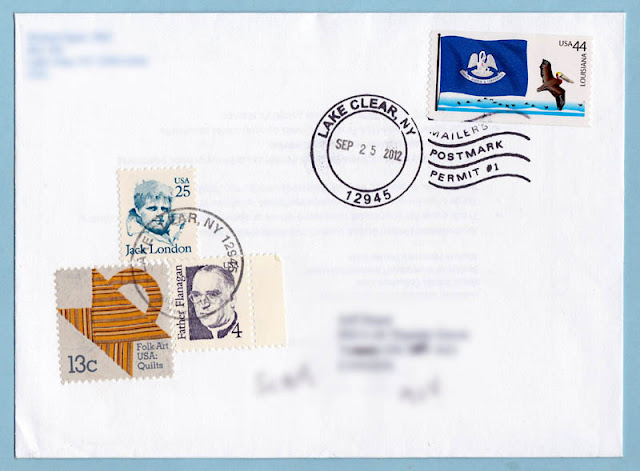