The postmark on this cover from Italy commemorates the 100th anniversary of the start of the First World War. The postmark location is Campiglia Cervo, a small town north west of the town of Biella in Northern Italy. Looks like a stamp show postmark: Mostra storico filatelica. 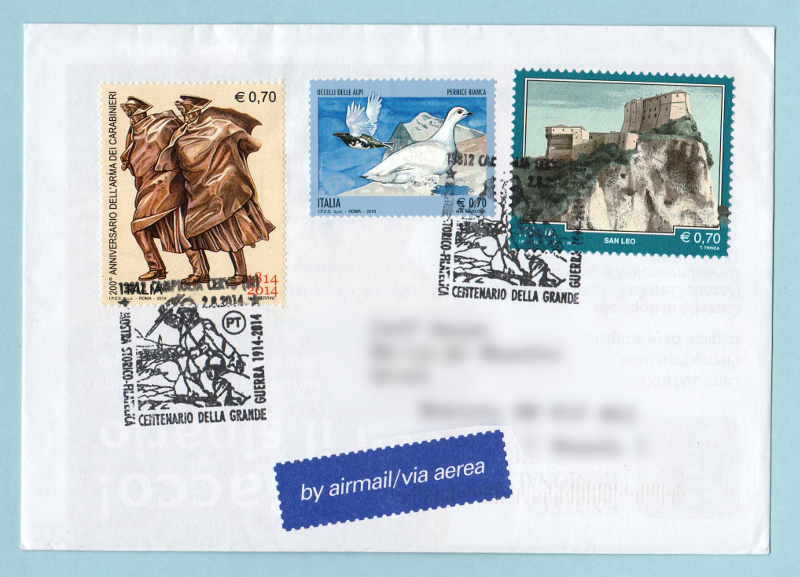 Another Haunted Canada stamp. This one was cancelled in Quebec City. The Château Frontenac is a hotel, originally built in 1893. It is a National History Site and a prominent feature on the Quebec City skyline. The hotel was named after Louis de Buade, Count of Frontenac, who was governor of the colony of New France between 1672 and 1698. Apparently his ghost haunts the hotel even though it was built nearly 200 years after his death. 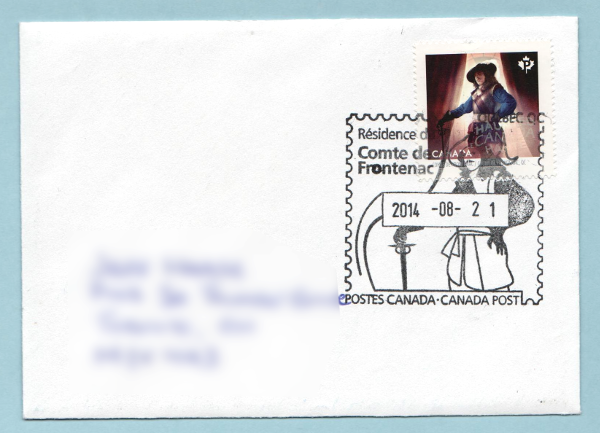 From the town of Diekirch in Luxembourg. The stamp on the right is from a miniature sheet commemorating the 80th anniversary of the “Fédération des Sociétés philatéliques du Grand-Duché de Luxembourg”. What's interesting about this stamp is that it is partially made from silk. The top layer of the stamp is made from very fine silk fibres (30g per meter) and it gives the stamp an interesting texture. 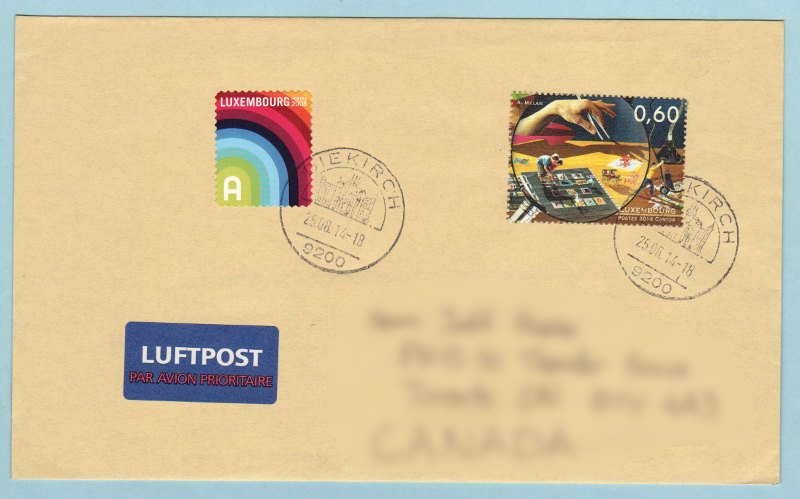 Cieszyn is a Polish city on the Olza River, which runs along the border between Poland and the Czech Republic. In 1920 the town was divided when the border was established. The larger part of the town became part of Poland. 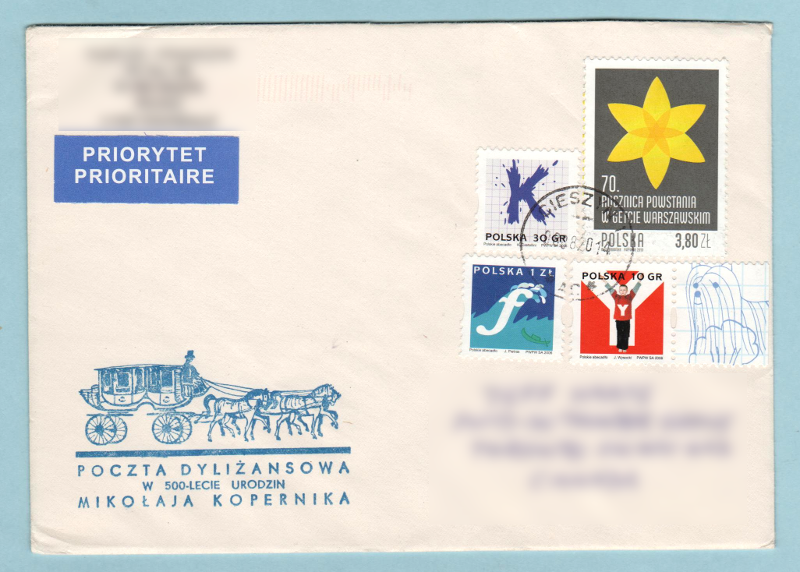 Another Haunted Canada stamp and postmark. The stamps depicts the a burning ship in the Northumberland Strait between Prince Edward Island and New Brunswick. The strait has seen many ship wrecks and apparently a burning ghost ship is occasionally seen from shore. 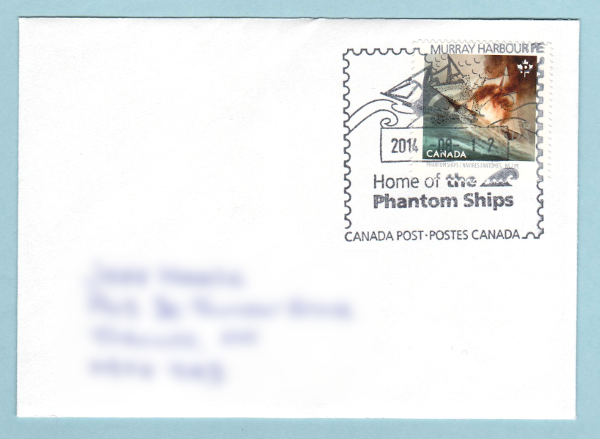 This was postmarked in Murry Harbour, PEI. There are 4 other maritime post office that have this postmark: Bouctouche NB, Pictou Island NS. River John NS and Tatamagouche NS.
Posted by Jeff at 5:00 PM No comments:

Postmarked by the Fortaleza Philatelic Agency. The stamp on the left is one of the "Art of Brazilian Football" stamps. It think this one is for Porto Alegre. The stamp on the right marks the Centenary of the Ceará Sporting Club. Ceará being the state for which Fortaleza is the capital. 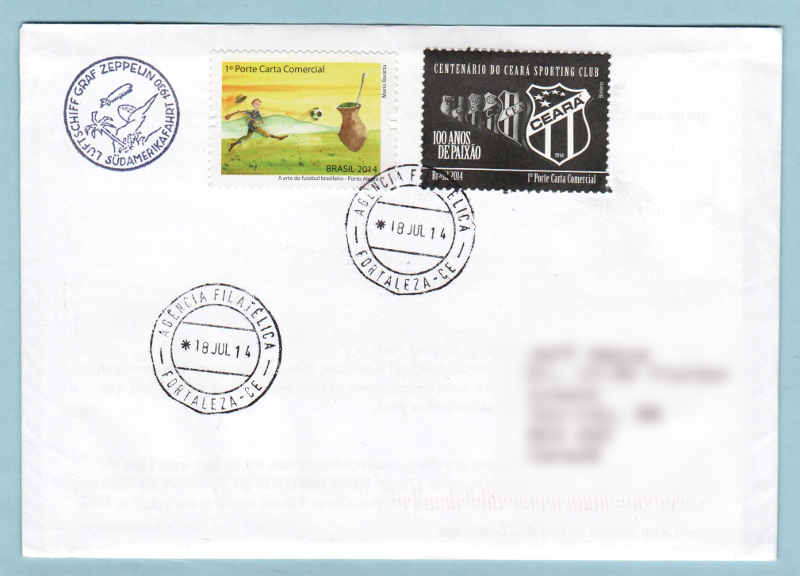 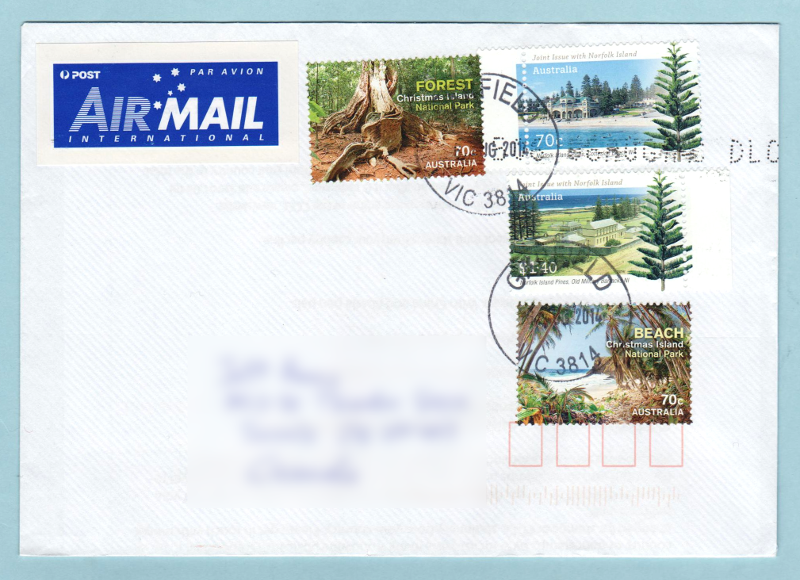 A block of four stamps commemorating 350 years of postal service in Brazil. This came to me from Porto Alegre: the capital of Rio Grande do Sul. 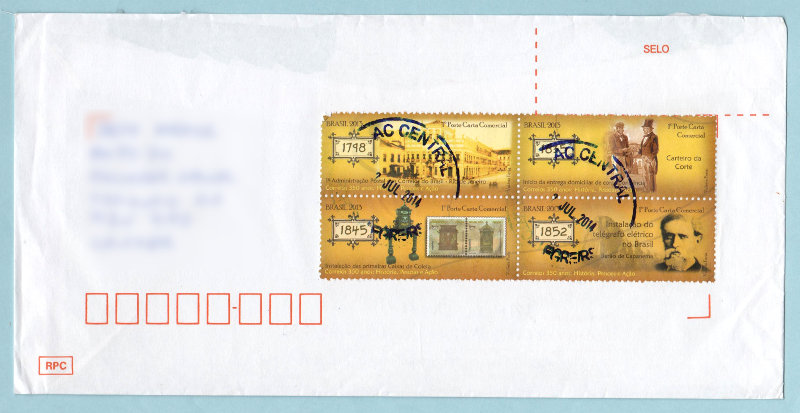 In June, Canada Post issued a book of 10 stamps with 5 designs that depict popular Canadian ghost stories. At first I wasn't impressed with these stamps but they actually don't look that bad. Some elements of the design are printed with an iridescent effect to add a subtle ghostly shimmer when the light hits them the right way. To accompany the stamps, surprising large commemorative postmarks were also created. 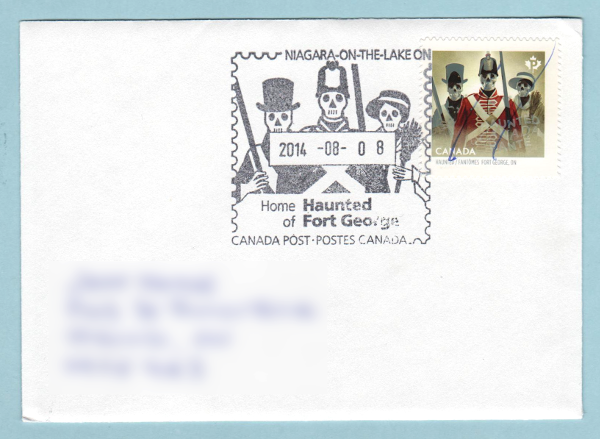 Fort George in Niagara-on-the-Lake, Ontario was built in the 1790's and was the British army headquarters during the war of 1812. The fort is said to be haunted by the ghosts of a young soldier and a little girl. On an abandoned railway track north of St. Louis Saskatchewan a glowing light sometimes appears which is said to be the spirit of a train conductor killed in the 1920's. This has become known as the St. Louis Light or St. Louis Ghost train. Creepy. 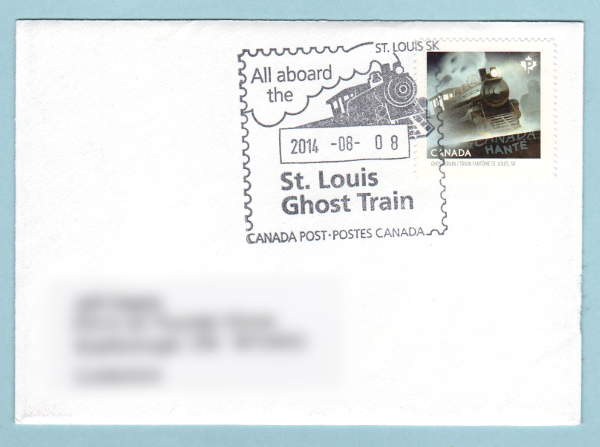 I also tried to get a postmark from Banff for the Ghost Bride stamp but the postmaster in Banff tells me the postmark is missing and he is waiting on a replacement. Examples of the other two should be coming back to me soon.

A Ukrainian cover from Mariupol in the Donetska region (the regional postmark is hard to make out on the second stamp from the right). The stamps on the right, postmarked with the first day postmark, were issued 24 April 2013 and are part of a set featuring tourist areas in Ukraine. The right-most stamp is Hang Palace in the town of Bakhchysarai and the stamp next to it is Ayu-Dag (Bear Mountain). Both places are in Crimea. 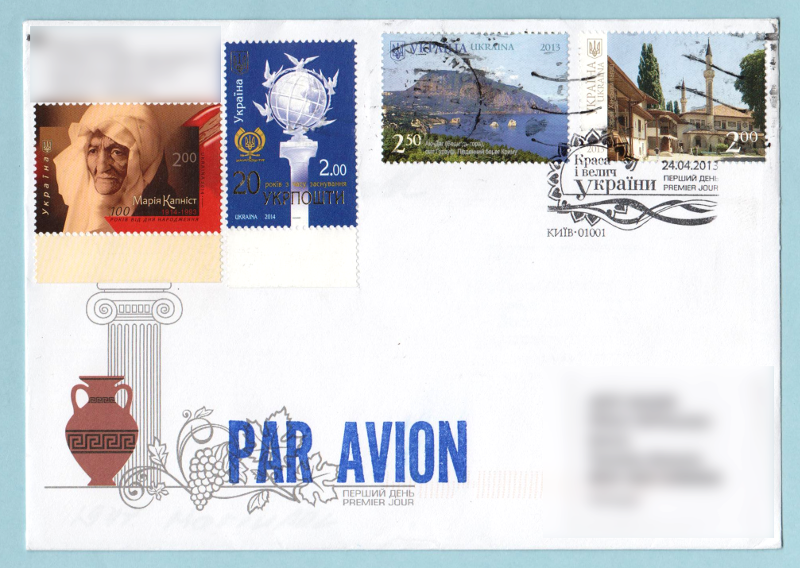 The two stamps on the left are more recent. The left most stamp commemorates 100 years since the birth of Ukrainian actress Maria Kapnist (who passed away in 1993) and the final stamp commemorates 20 years of Ukraine postal services.
Posted by Jeff at 7:15 PM No comments:

From the Chilean city of Antofagasta: La Perla del Norte. It's a coastal city that lies on the edge of the Atacama Desert which is the worlds driest desert. The Tropic of Capricorn cuts through Chile just north of the city. The stamp on the right commemorates the 125th anniversary of the Chilean philatelic society. 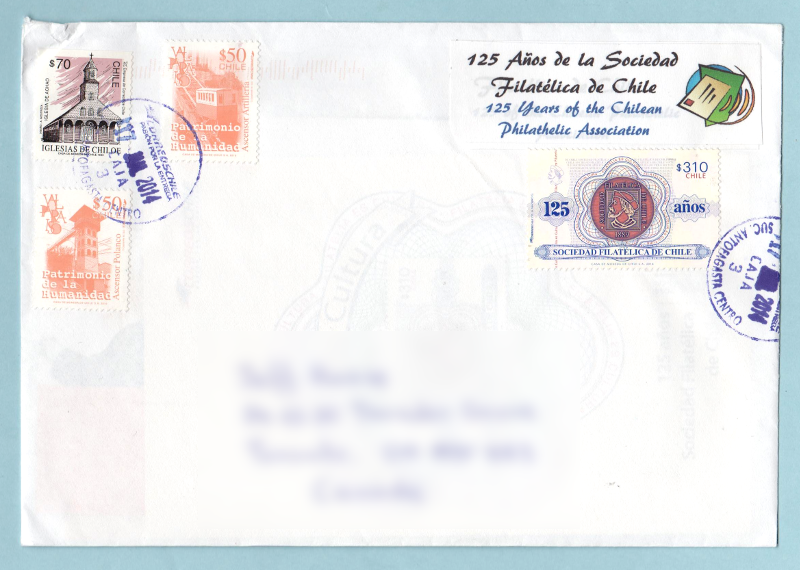 Shortly after his death in 2013, Venezuela Post issued a sheet of stamps commemorating the life of Hugo Chavez. 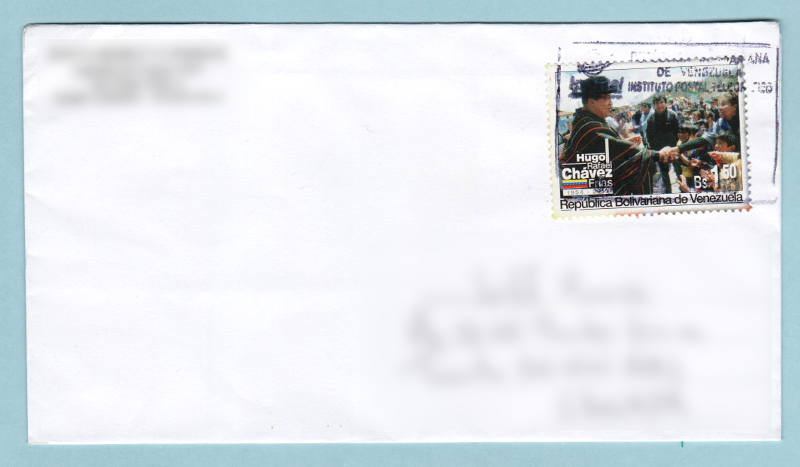 Email ThisBlogThis!Share to TwitterShare to FacebookShare to Pinterest
Labels: Venezuela

Postmarked with a Pellworm lighthouse postmark. Pellworm is one of the North Frisian islands which sits off the north-west coast of Germany. Home to 1200 people. The lighthouse is a popular site for weddings. 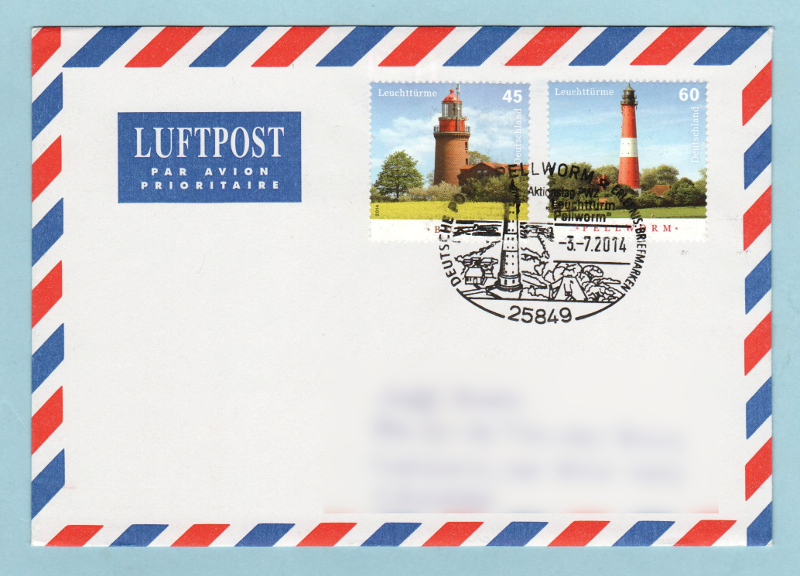 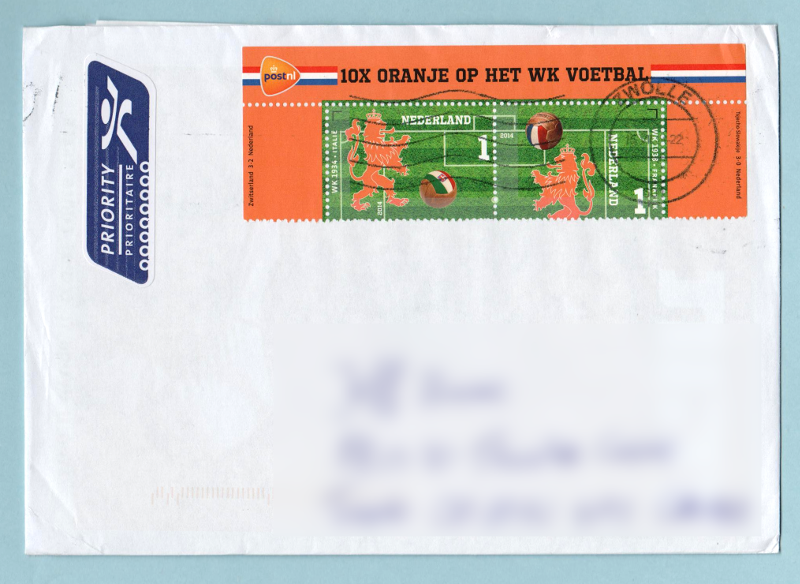 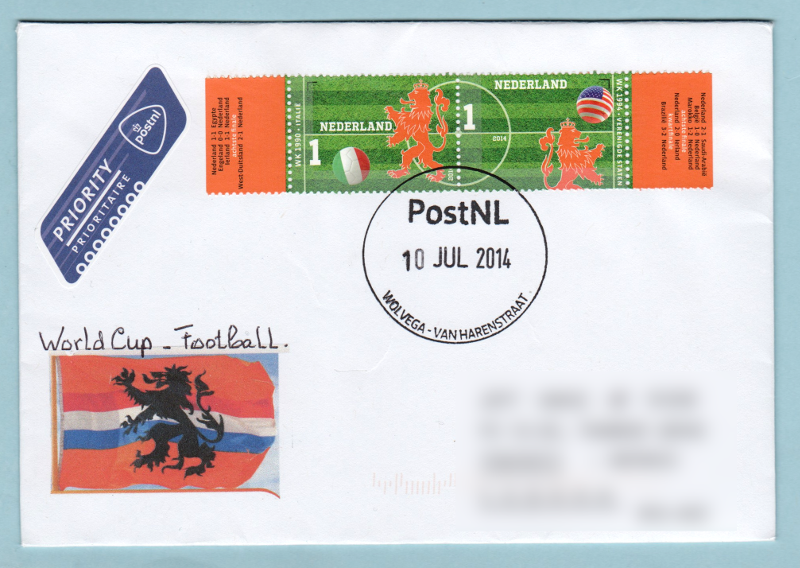