This is the first time I've seen a souvenir sheet issued in this series, although I don't follow the series that closely. It 's very different from previous contemporary art stamps issued in Greenland. But this isn't just a map. And it isn't a map of Greenland. 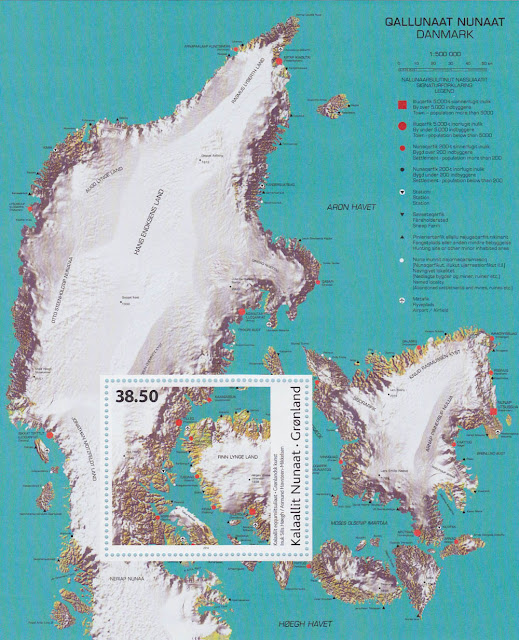 This is a map of Denmark, covered in glaciers and given Greenlandic place names. The idea came to the artists after seeing a map of Greenland in an in-flight airline magazine, with all the glaciers given Danish names.
Posted by Jeff at 1:15 AM 2 comments:

Baltasound is the largest settlement on the Sheland island of Unst. And its post office is the furthest north of any post office in the UK. 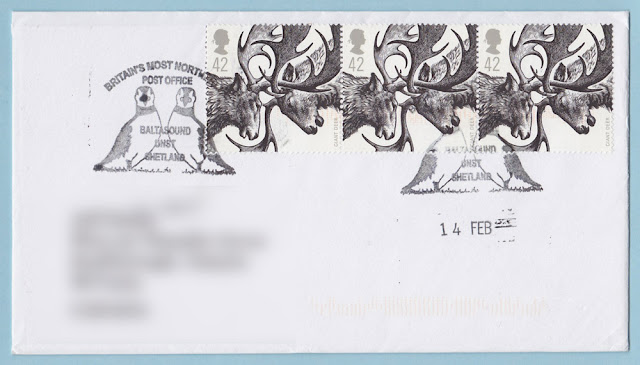 Those are puffins on the postmark. I really should not have used these stamps but... I did and this was the last of them. Next time I prepare covers for the UK I'll use something that doesn't hide the postmark as much.
Posted by Jeff at 10:27 PM No comments:

Robert Scott of the Antarctic

The last of the "House of Winsdor" postmarks I requested. 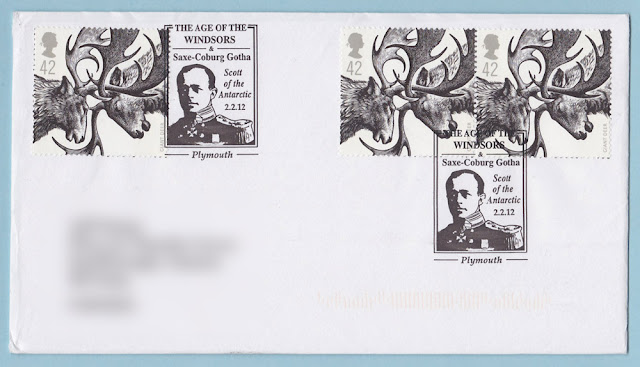 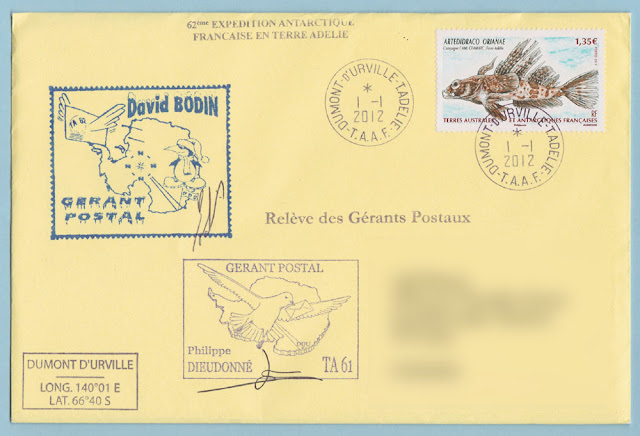 In Memory of Robert Scott

Another "House of Windor" special postmark received today. This one commemorates the death of Robert Scott in the Antarctic, 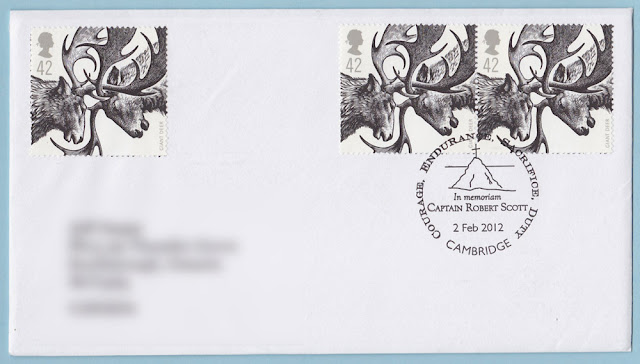 A new contribution to this series turns up every now and then. This time it's Jordan. I still don't know much about this sheet and there isn't much information about it on the Jordan Post website. I understand it was a limited run of 5000 and although "2011" appears on the stamps, the FDCs I've seen on EBay are all postmarked 23 Jan 2012. 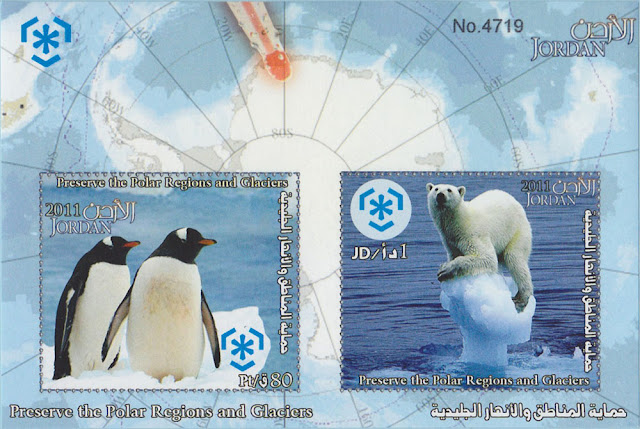 There is also a Nicaraguan Preserve the Polar Regions sheet floating around but I know even less about that one and I'm reluctant to purchase it right now until I learn more about it.
Posted by Jeff at 2:04 PM No comments:

I didn't think I would see this one again. The Mawson Huts Expedition of 2011/12 was cancelled so when I saw this in my mail box I was a bit puzzled. And more so by the "First Day of Issue" postmarks. 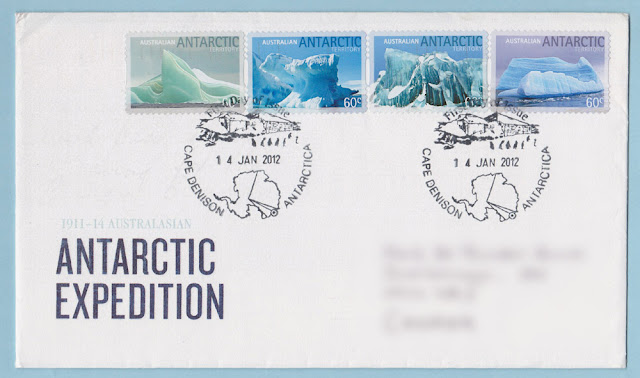 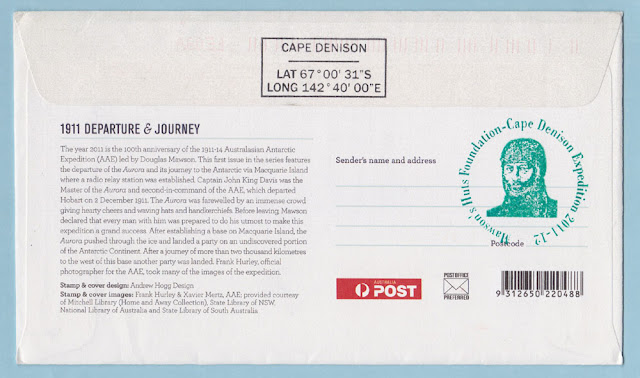 A little bit of internet searching revealed that a team did manage to get through to Cape Denison as part of the AAE Centenary. They came aboard the Aurora Australis and traveled the last 20km by helicopter on 14 Jan 2012. One of the people flown in that day was the postmaster which explains the 14 Jan 2012 postmark on my cover. More to read about the event here.

Why the first day postmark? The iceberg stamps were issued 7 June 2011 and the Cape Denison post office is closed most of the year so 14 Jan 2012 was the earliest this post office could have cancelled these stamps. Hence the first day of issue postmark.
Posted by Jeff at 7:12 PM No comments:

Edward Wilson of the Antarctic

Royal Mail issued a sheet recently as part of the "House of Windsor" set and in the sheet was a first class stamp showing Robert F Scott and his ill-fated Antarctic expedition team. Of all the special first-day postmarks available at the time of the stamp issue, two of them were related to Scott and one to Edward Wilson. Edward Wilson, renowned English polar explorer, was born in Cheltenham on 23 July 1872. He was part of Robert Scott's expedition to the South Pole as Chief of Scientific Staff and perished along with Scott and Henry Bowers in late March of 1912. 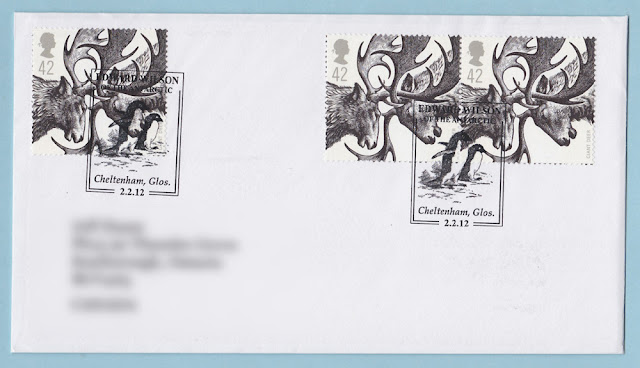 I had a partial sheet of 42p stamps available so I mailed off some covers to the UK and this was one of them. When going after a special postmark, your choice of stamp means everything. This stamp has nothing to do with the subject matter of the postmark but I can overlook. However the stamp's black and white image makes it hard to clearly make out the postmark. I should have arranged the stamps better and instructed the postmark center to apply the cancel to the bottom corner of the stamp to keep as much of the stamp and postmark unobstructed as possible. Perhaps I will be better prepared next time.
Posted by Jeff at 7:16 PM No comments:

This was mailed back to me from South Korea's Dasan Station in Ny-Ålesund (Norway) by Dr. Soon Keun Chang of the Korean Polar Research Institute (KOPRI). He is an honorary research scientist with the division of polar earth system sciences. Dasan Station is a seasonal base established in 2002 for conducting environmental research, glacial and periglacial geomorphology, hydrology and atmospheric chemistry. The building is maintained by Kings Bay AS: the company that owns everything in Ny-Alesund. This same building houses the French IPEV Rabot Station. 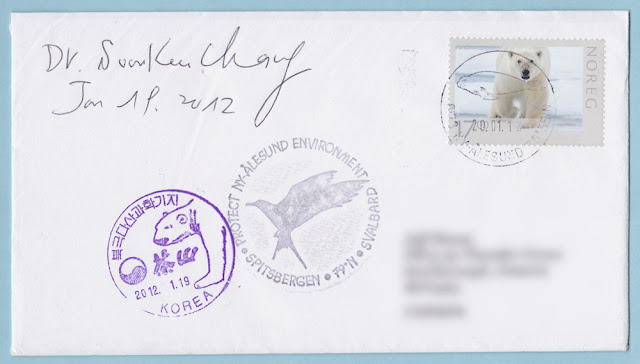