Stamps from Brazil featuring species of ants from that country:  leaf cutter ant, fire ant, weaver ant, and
trap-jaw ant. The stamps each have UV tagging that covers the body of the ant. Unfortunately my UV light doesn't generate the proper wavelength of light to view them - time to shop around for a new light. 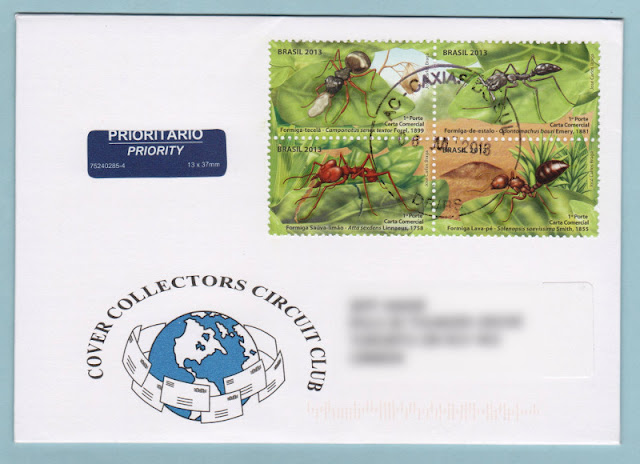 Canada Post has an on-going stamp series that honours Canadian recording artists. I think this years is the fourth issue in that series and this year the theme was Canadian bands. When I first heard of this last year I knew that Rush would have to be one of those bands. Earlier this year Rush was inducted into the Rock and Roll hall of fame so putting out a stamp to honour them seemed logical.

Rush has sold in excess of 40 million records worldwide, ranking third behind the Beatles and the Rolling Stones for most gold and platinum records sold by a rock band. Since releasing its debut album in 1974, the Toronto group has become one of Canada’s most successful and influential rock bands 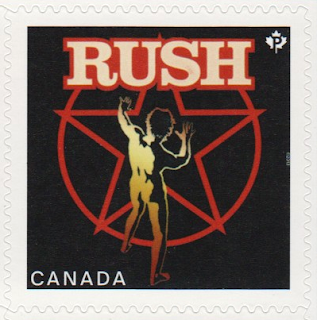 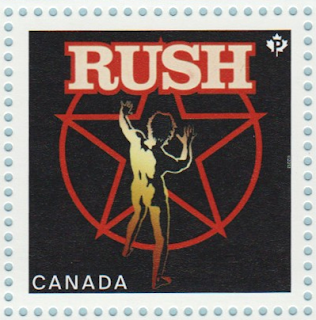 The Rush stamp features an image they used on their hugely successful 1976 album "2112". They still put out albums and tour and have developed an almost cult like following. They are the sort of band you either love or hate.

When I was growing up, my favourite rock band was Rush. I had all their albums, posters on my walls... they were the first band that I was truly obsessed with. But I don't really follow them much any more. Haven't for a long time. 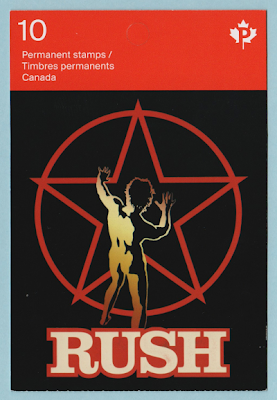 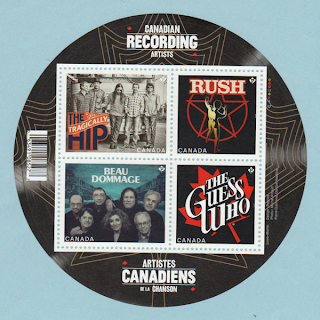 The other bands represented in the series this year are The Tragically Hip, The Guess Who and Beau Dommage. All received similar booklet, FDC and postcard issues. But I'm not the least bit interested in any of them. The only reason I bothered with the souvenir sheet was because of the Rush stamp. 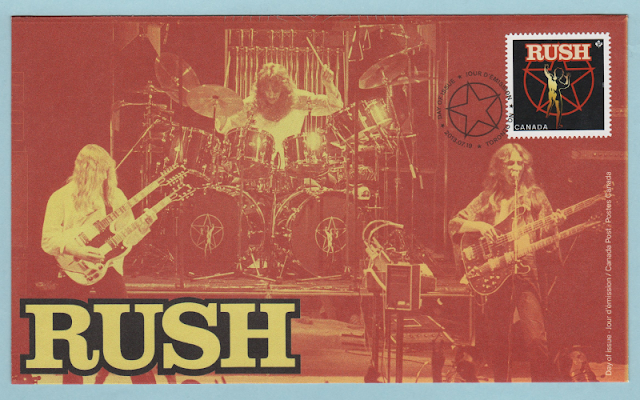 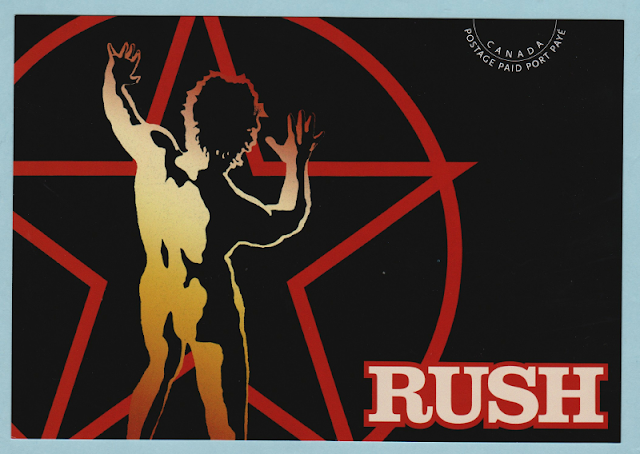 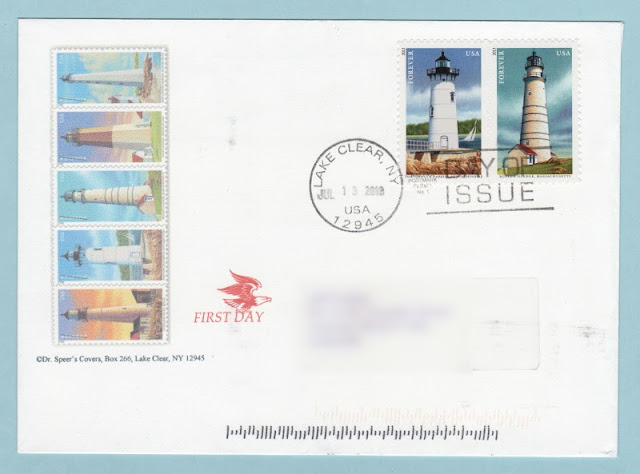 On 3 July 2013, Iceland post issued a special cancellation to mark the 40th anniversary of the end of the Westmann Islands volcanic eruption. In 1973, the Eldfell mountain on the island of Heimaey erupted, forcing the evacuation of the entire population of the island to the main land. The eruption lasted for several months and destroyed a large part of the only town on the island. When it was all over, the area of the island had increased by more than 12 square kilometres. 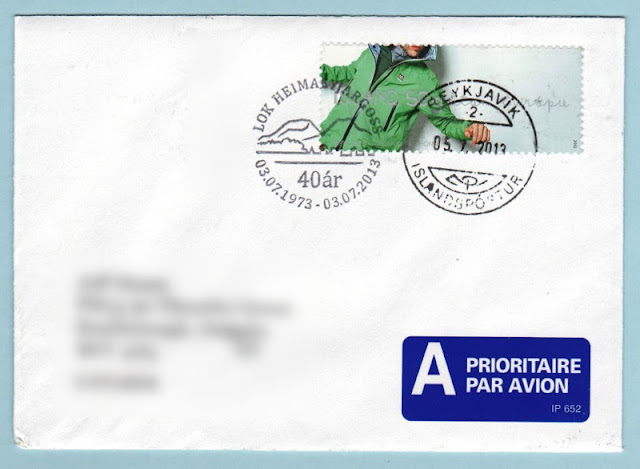 The island of Tromelin is a French overseas territory, 350 km east of Madagascar.  It is a small featureless island of 200 acres covered by brush and surrounded by coral reefs. A slave ship was wrecked here in 1761. The crew of the ship managed to get back to Madagascar but they left 60 slaves on the island. They remained stranded on the tiny island for 15 years until Bernard Boudin de Tromelin, captain of the French warship La Dauphine, returned to retrieve the survivors : seven women and one child. 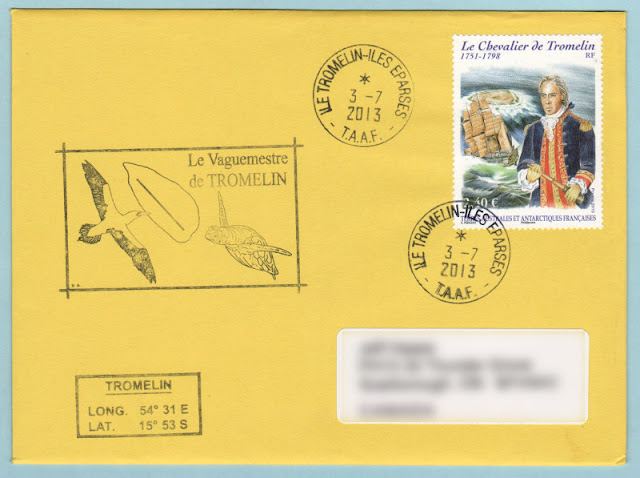 India: the wild asses of Ladakh and Kutch

The sheet on this cover commemorates the wild asses of India. The Kiang or Tibetan wild ass, occupies the northern mountainous region of India known as Ladakh. And the Ghor Khar or Indian wild ass comes from western India, from the the Kutch region in Gujarat. 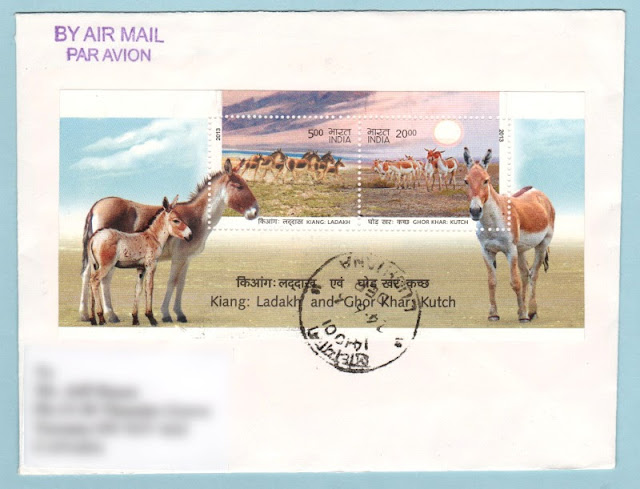 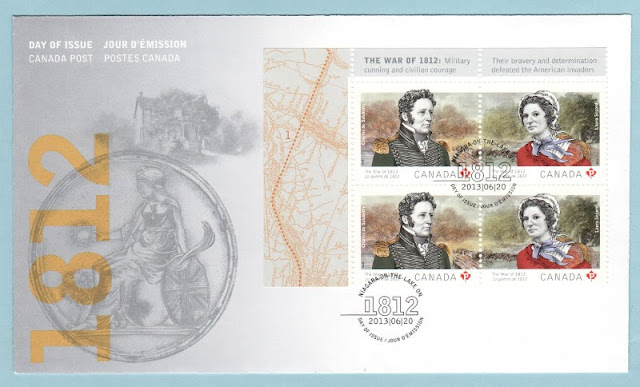 Processed through the Greenford Mail Center I believe. Greenford is a suburb in the west end of London. 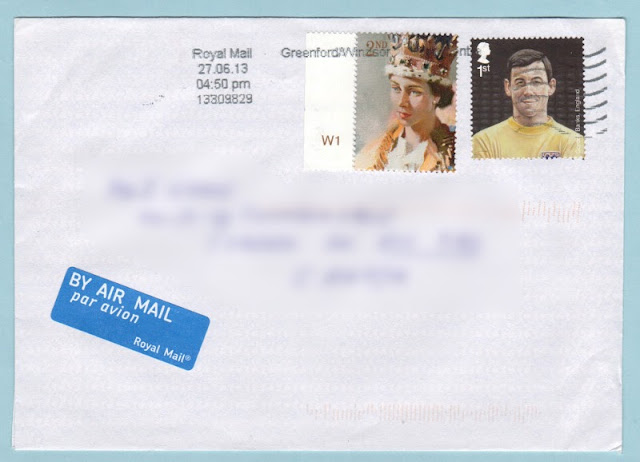 The latest German Lighthouse stamps. The first-day postmark commemorates the 100th anniversary of the Büsum lighthouse which is also the subject of the stamp on the right. The stamp on the left shows the Flügge lighthouse. Thanks Martin! 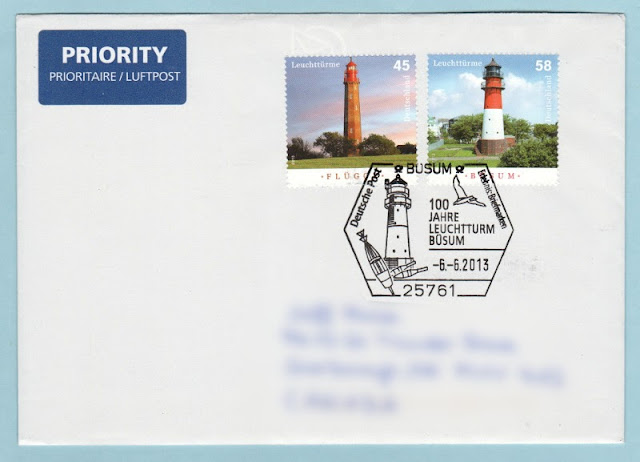