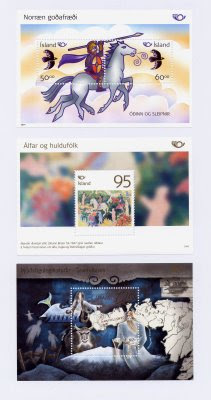 Email ThisBlogThis!Share to TwitterShare to FacebookShare to Pinterest
Labels: Iceland

I received some new stamps from San Marino the other day which included their Europa issue for 2008 and the International Year or Planet Earth commemorative set. The Europa theme this year is letter writing and the San Marino issues are very cute. The Planet Earth issue didn’t appeal to me until I had a closer look at them, particularly the 0.60 and 0.85 values depicting “air” and “man”. These just aren’t images you see on every day stamps so I had to have them. 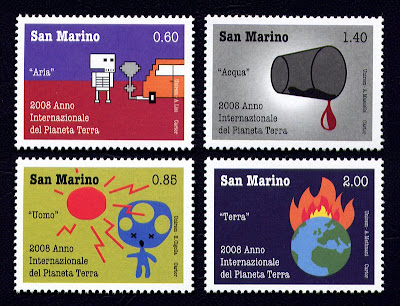 You can purchase recent San Marino issues online directly from their Philatelic & Numismatic website. My order took about a month to process and another week for delivery which wasn’t bad considering half of my address was missing from the envelope. Their shipping costs are 4.50€ no matter how big the order. I thought this was a little steep but when I received my order, low and behold, there was 4.50€ Euro worth of San Marino stamps stuck to the envelope – registered mail. So although I didn’t appreciate paying the high price for shipping, I wasn’t completely disappointed.
Posted by Jeff at 12:46 AM No comments:

Self-adhesive stamps have been in use since as early as the 60’s and are now produced in large numbers by Canada Post and the USPS. I’ve never liked the idea of collecting self-adhesive stamps. I couldn’t figure out how they would work as a used issue. Can you soak them? And how can you keep single mint issues without removing them from their backing sheet? I have some in my collection but they are all part of full sheets or booklets.

I recently went through a hoard of used stamps on paper and decided to soak them – something I hadn’t done since I was a kid. Some of these stamps were self-adhesive and I read somewhere that they can be soaked too so I gave it a try. And to my amazement, they came off the paper very nicely. I used warm water and when they looked like they had been soaked long enough I gently pulled the stamps off the wet paper and each time almost all of the adhesive residue remained on the paper. The stamps I was left with were clean and for the most part, residue free. Sometimes a little gentle rubbing with my finger was needed to remove the last bit of gum from the back of the stamps.

As for mint stamps, I’ve seen some people listing individual mint self-adhesives for sale and these stamps had not been removed from their backing paper. What you do is remove everything from the backing paper except the stamp or stamps you want to keep. Then the backing paper is cropped with scissors leaving a small border around each stamp. The result is a single mint self-adhesive stamp that has not been removed from its backing paper. To do this might mean sacrificing all of the stamps around the one you want to keep but they can always be stuck on some other non-stick paper (or some of the cut up backing paper) and used for postage later.
Posted by Jeff at 7:53 PM No comments:

The channel island of Alderney has been issuing stamps for the past 25 years and to mark the occasion they have released a set of six commemoratives featuring photographs of island scenes that appeared on the first Alderney definitives issued in 1983. They have also put out a 5£ definitive that I don’t find terrible interesting. Alderney issues a few commemoratives each year, typically depicting island scenery and wildlife, and they can be purchased online from the Guernsey Philatelic Bureau. Their shipping charges are very reasonable and service is prompt and reliable.

Alderney is a British Crown dependency and an autonomous state of the Bailiwick of Guernsey. The third largest channel island, it has a population of around 2400 and covers an area only eight square kilometers. At one time their economy was entirely based on agriculture but is now dependant on tourism and financial services. The island language, a Norman dialect known as Auregnais, is now considered extinct, in part due to an influx of British immigrants and an almost total evacuation of the population that lasted the duration of the Second World War.
Posted by Jeff at 12:49 AM No comments:

Email ThisBlogThis!Share to TwitterShare to FacebookShare to Pinterest
Labels: Alderney 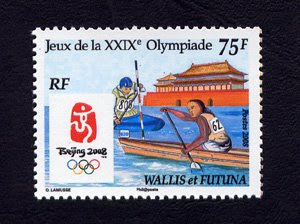