Cloud stamps cut from a 2022 sheet. Cumulonimbus capillatus, half way to a thunder storm, on the left. And Cumulus congestus, a nice rain cloud, on the right. The postmark was applied at the large Belgium Post mail processing facility (Gent X) in Ghent. 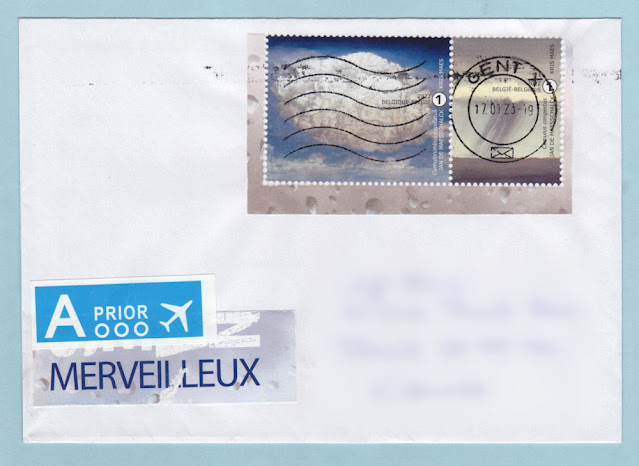 Danowita is a small Sri Lankan town 50 km north east of the capital Colombo. The stamps are from a 2022 set of stamps that feature butterflies native to Sri Lanka. On the left is a One Spot Grass Yellow and on the right is a Sri Lankan Tree Nymph. 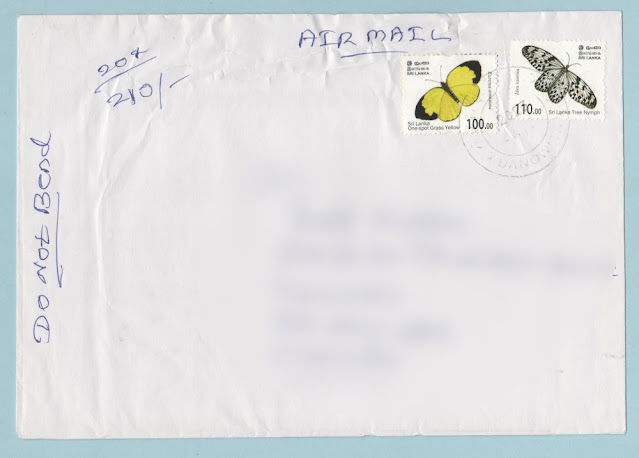 From the town of Lisdoonvarna (Lios Dúin Bhearna) in County Claire. The souvenir sheet on this cover was issued in 2019 to commemorate the 50th anniversary of the Apollo 11 moon landing and pay tribute to astronauts with Irish heritage. 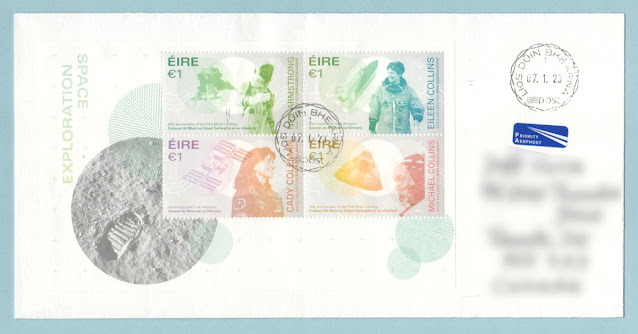 Top left is Apollo 11 mission commander Neil Armstrong, first man to set foot on the moon. And bottom right is Apollo 11 command module pilot Michael Collins. Top right is Eileen Collins. She was the first woman to pilot a shuttle mission (STS-63, Discovery in 1995) and the first woman to command a space shuttle (STS-93, Columbia in 1999). And bottom left is Cady Coleman who spent 159 days on the ISS in 2010/11. All four of these astronauts have Irish ancestry.
Posted by Jeff at 11:52 AM No comments:

While browsing the Saint Pierre and Miquelon tourist website I noticed they still mail physical copies of their current visitor guide on request so I filled out the form to see what would get mailed to me. A few days later I was surprised to find this in my mailbox. The blue stamp is a 2017 20g local definitive and the other nine 2022 stamps are spotted sandpipers. It cost €13.52 to send this to me. 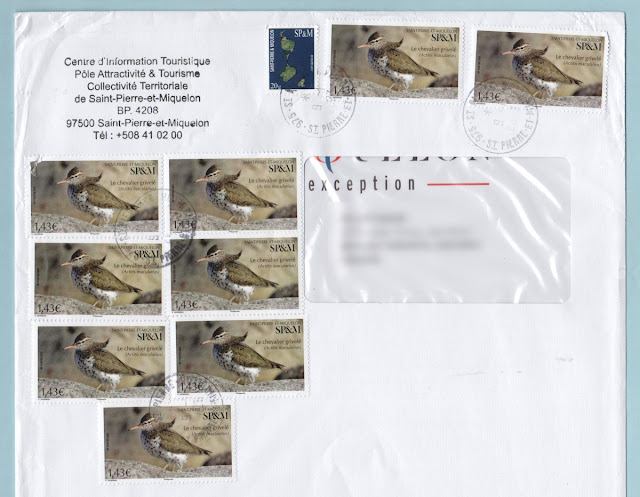 I've always been curious about SPM. Few people here in Canada actually know about it yet it's right there on our doorstep. A French territory 25 km off the coast of Newfoundland. Later this year I will be in Newfoundland and it looks like there will be just enough time to make the trip down to SPM for a couple of nights. Fingers crossed. 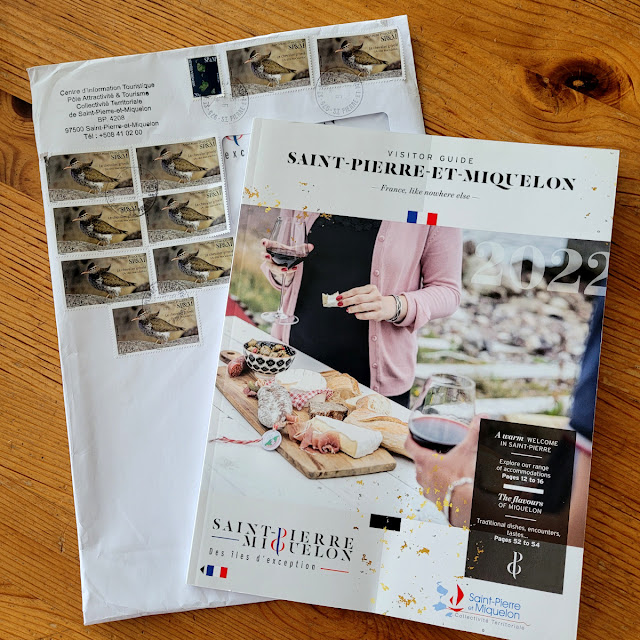 I did not think Tromelin was part of the regular rotations the Marion Dufresne makes through the French southern islands but apparently it is. I must have known that too otherwise I would not have specifically requested to have this returned from there. 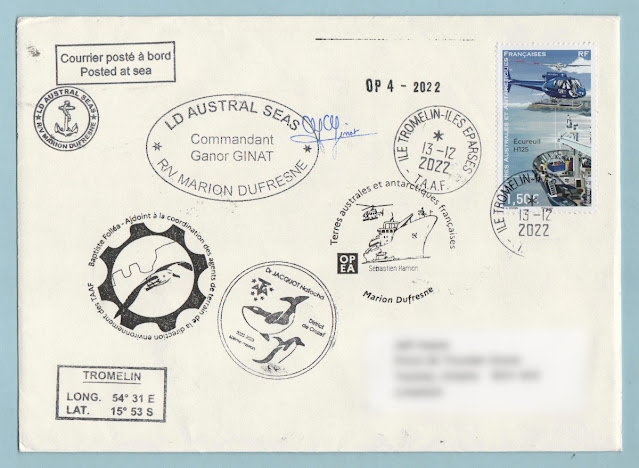 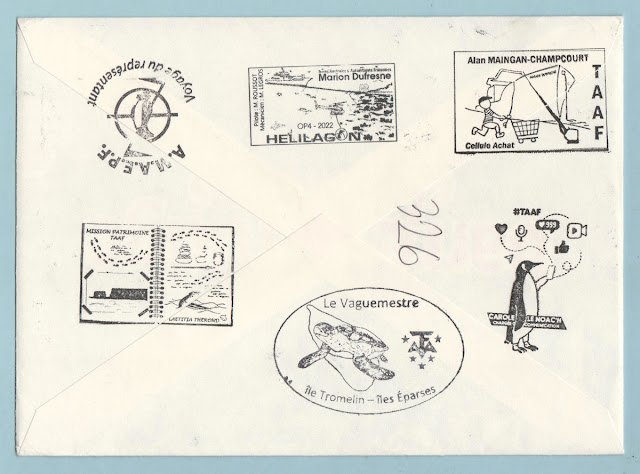 I also received this one on the same day. I believe I sent this sometime in 2021 but it must have missed the boat so it ended up on a later rotation. Same markings. Smaller envelope. I think I like this one better. 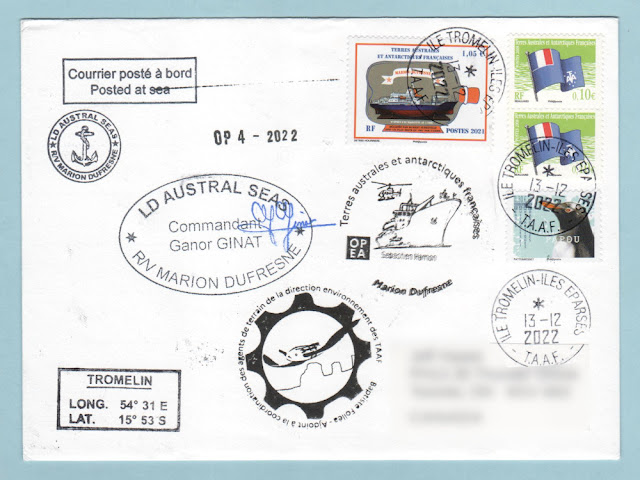 Neyagawa is a city within the Osaka prefecture just outside of the city of Osaka. The Neyagawa pictorial postmark shows the Ishinohōden Kofun, an ancient burial mound in Neyagawa, and Taima Park, a public park on the shore of the Yodo River. The stamp on the left is a 2022 letter writing week stamp and on the right is a sika deer stamp from 2015.

End of 2022 postmark from Prague Castle. The clock face in the postmark represents the clock on the south tower of Prague's St. Vitus Cathedral. The 2010 stamp on the left is the painting "Paris and Helena" by Czech portrait painter Karel Škréta. On the right is a 2022 Christmas stamp. 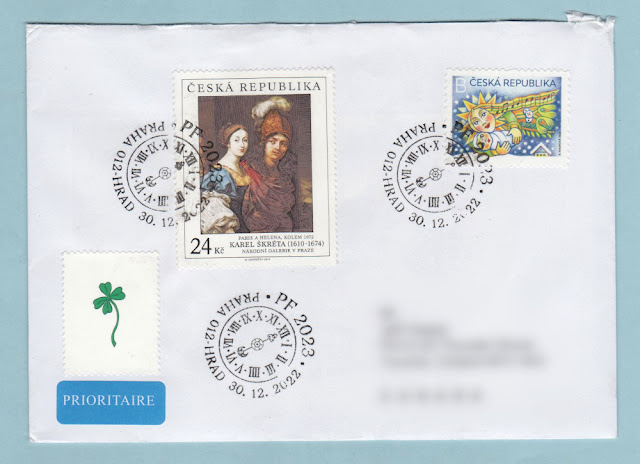 The red postmark is from the Izumi ward of Yokohama. In the background is Mount Fuji and the mountain in the foreground is Mount Oyama: the road sign mentions it. The other sign like thing says "something"  Asahi. I believe that is supposed to be a giant Sagami kite. And the leaves in the bottom left are from a ginkgo tree.

I love Japanese pictorial postmarks. I don't think I've ever seen one smudged or crooked. 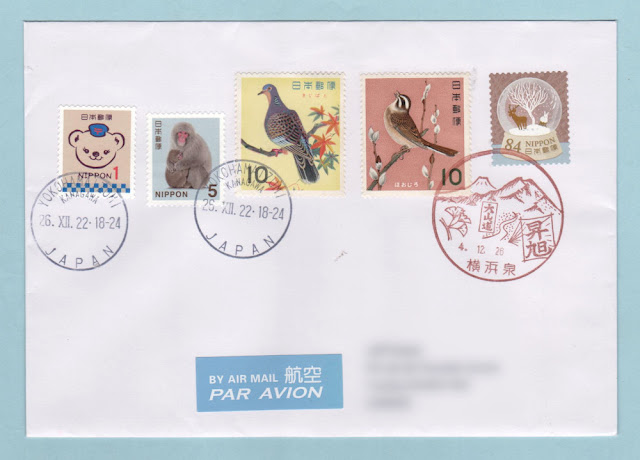 Some random stamps on a cover from Switzerland. This was sent from the town of Riva San Vitale in the south of  Switzerland on Lake Lugano. From left to right, UN 25th anniversary from 1970, the Aare River from 2022, nature conservation from 1970 and an added value stamp from 1972 commemorating the 50th anniversary of international airmail traffic. 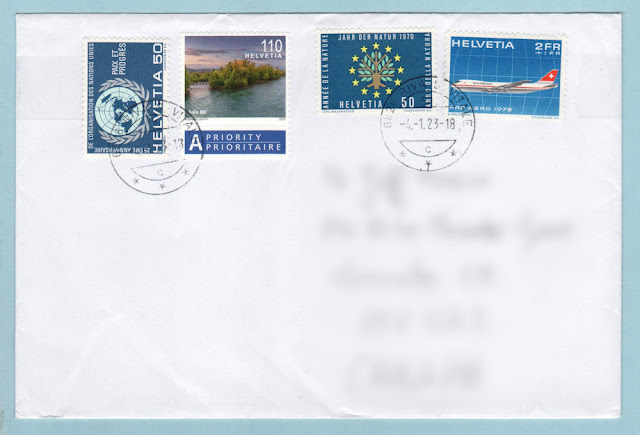 Christmas stamps from Germany: 2022 on the left and 2021 on the right. The postmark is from the St. Nikolaus Post Office. St. Nikolaus is a small town or village in the southwest German state of Saarland. Kids can write letters to Santa and I guess they get a response from St Nikolaus with this postmark on it. Or you can have it applied to your own mail. It's a Christmas tradition that has been going on since 1966. 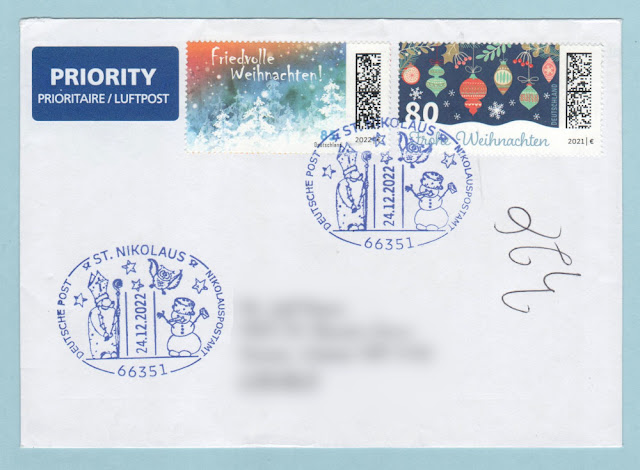 From Fairfield, a complete set of 2008 stamps featuring dogs in Australia. From left to right: a German Shepherd, an Australian Cattle Dog, a Beagle, a Border Collie and a Labrador. Also from 2008, a special occasions stamp on the left and an organ and tissue donation awareness self-adhesive stamp on the lower right. 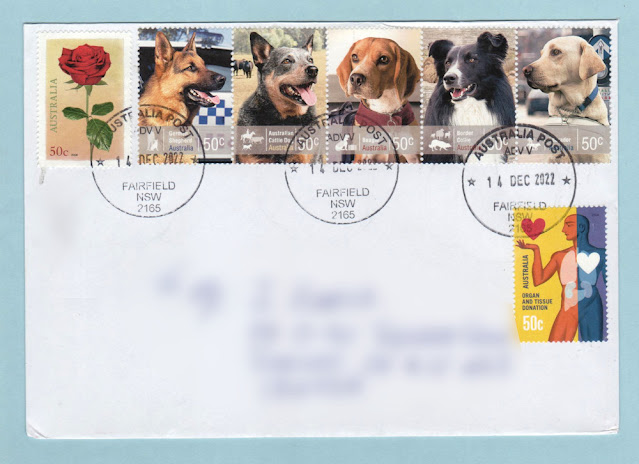 The envelope and postmarks commemorate the 13th century Iglesia de Santa Ana in Seville. All stamps are from 2017. Top right is a tourism stamp and part of a set (and a joint issue) that commemorates 2017 as the International Year of Sustainable Tourism for Development. The other two stamps are from a set celebrating Spainsh cinema. On the left is Spanish film actress Lina Morgan. And lower right is Spanish film director Vicente Aranda. 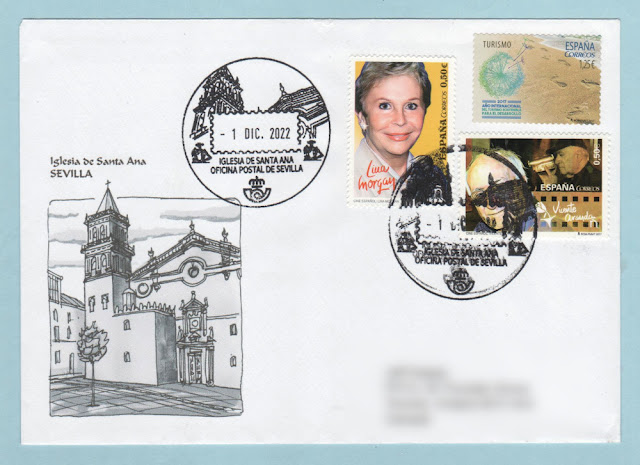