Centenary of the Australasian Antarctic Expedition

New AAT stamps coming out 2nd August to start a series commemorating the 100th anniversary of the AAE. The plan is to issue a set of 5 stamps each year leading up to 2014. The first Australian Antarctic Expedition left Hobart in December of 2011 under the command of Douglas Mawson and returned in February 1914.

I like the AAT issues but find acquiring them to be rather expensive. I like to order stamps from the Australia Post stamp shop but shipping is rather expensive and Australian stamp issues tend to go off sale not long after issue so I can never justify the shipping cost for the few issues I want that are available to purchase. But I think I'll find a way to get these. Maybe use them on a cover to one of the bases or something.
Posted by Jeff at 4:33 PM No comments:

I had to try. And actually, despite a little slip that messed the cancel up a bit the post master did an ok job. It isn't smugged, it's straight and it's well placed. But looking at it now, I have to say I'm not crazy about that stamp. I should have waited for Canada Post to issue something better. I didn't want to use a bigger stamp though and the self-adhessives are so much easier to place. Maybe I'll try again someday when they get a new cancel. 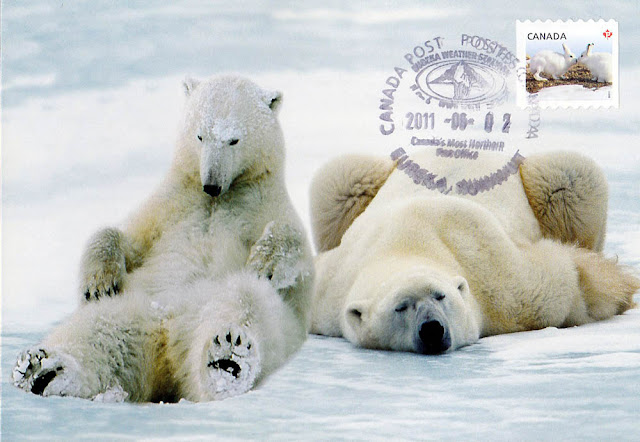 After looking at this postcard a bit, it seems obvious to me now that it is not a real image. Polar bears are solitary animals. They don't spend time together, lying around on the ice. If you look at the bear on the left, clearly he was "added" to the image. He's sitting on the ice yet it looks more like he's sitting in a hole. It was probably an image of a bear sitting in the snow and someone photoshopped him out and onto this image. It's a shame really. as it doesn't add to the image. And now that I know it's fake I can't look at this card without seeing how obvious it is.
Posted by Jeff at 6:32 PM No comments: