Received this little Russian stamp sheet earlier this week. The rocks in the lower half of the sheet are textured and feel rough when you touch them. Wrangel Island (о́стров Вра́нгеля) is in the Arctic Ocean, to the extreme east of Russia and not that far from Alaska. The entire island was declared a nature reserve in the 1970's and is strictly controlled. It has been a UNESCO World Heritage Site since 2004. Nobody lives on the island and only a few people are allowed on the island for scientific research. Wrangle Island is very popular with the polar bears during mating season and has the highest concentration of polar bear dens in the world. 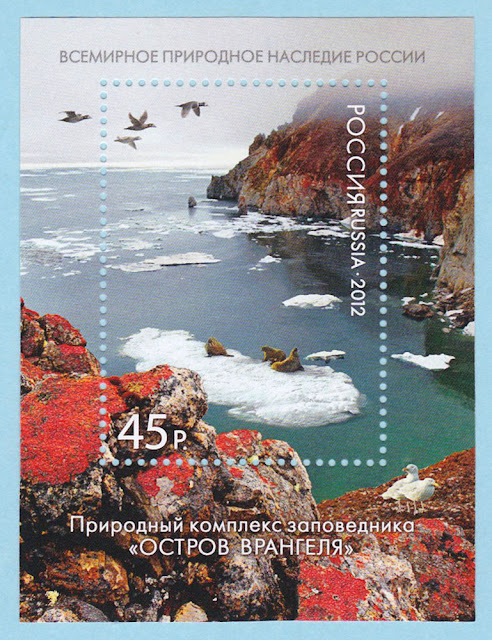 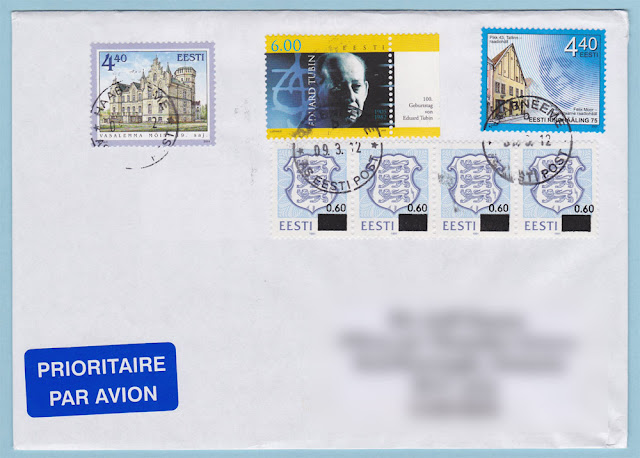 Although the postmark says Ny-Ålesund, the postmark request was sent to Oslo. It would be nice to see this postmark replace the actual one used at Ny-Ålesund. The last few I've seen from there looked a little worn out. But I suspect this is just a philatelic postmark to be used by the Norwegian philatelic bureau in Oslo. 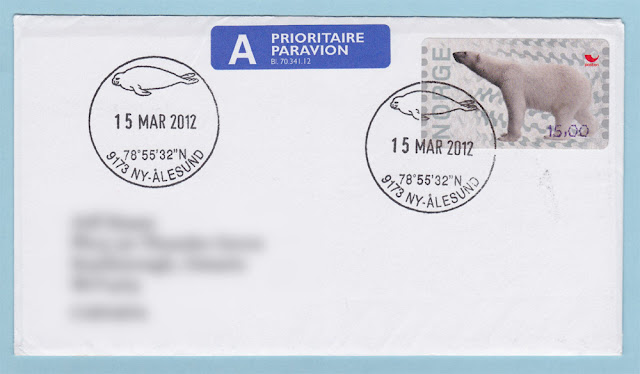 This cover came to me today from François - Thank You!. The envelope features images from the region of Côte d'Amour and on the envelope is a 2011 Marie Curie self-adhesive commemorating the centenary of her winning of the nobel prize as well as a pair of self-adhesive yellow Marianne stamps which I have never before seen in self-adhesive format. This envelope also reminds me that it has been a while since I've been on a real vacation. 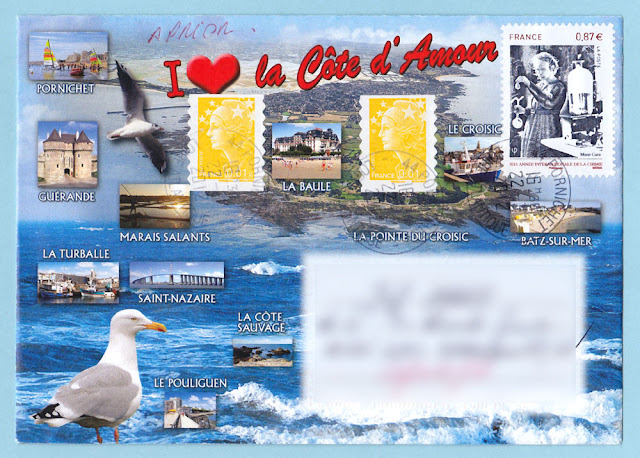 Email ThisBlogThis!Share to TwitterShare to FacebookShare to Pinterest
Labels: France

I sent this stamped postcard to Greenland Post to have it cancelled with the Ittoqqortoormiit postmark. Ittoqqortoormiit is a tiny village on the East coast of Greenland. It's very remote and very difficult to get to. 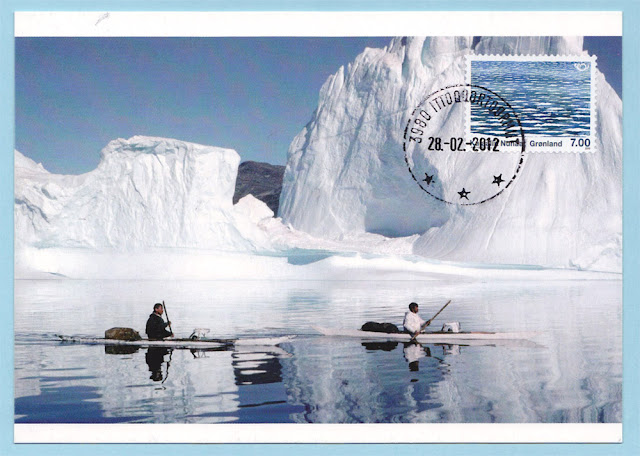 Greenland Post produces maximum cards for all of their stamp issues and makes the postcards available for purchase also. This postcard was produced for their 2011 communication series of stamps and the stamp I used was one of the 2010 Norden issues.
Posted by Jeff at 12:21 AM No comments:

This little stamp found its way into my collection the other day. It's from 1975 and it commemorates the landing of Venera 9 and 10 on the surface of Venus on the 22 and 25 of October, 1975. Everyone knows about the achievements made in space by the United States. But during the Cold War there was also a push by the Soviet Union to explore space and in the West, most of the achievements made by the Russians went  unnoticed by the general public. 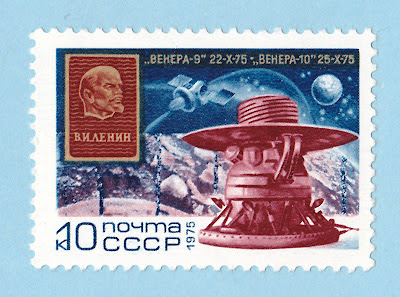 I remember the US Viking landers that made their way to Mars in 1975. But I knew nothing of the Russian Venera program to explore Venus between 1961 and 1985. I learned about this program recently and was amazed to learn that they had successfully returned images from the planet's surface. The Venera probes are, to this day, the only craft to have visited the surface of Venus and the images they returned are the only images we have of the planet's surface. 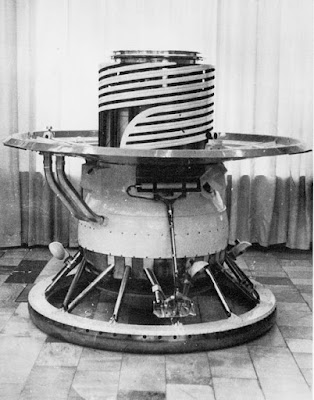 Running across the lower half of the stamp you can see the surface image taken by Venera 9. This was the first image of the Venetian surface ever taken. The surface of Venus experiences temperatures of 465C and an atmospheric pressure of 90 bar. That's equivalent to the heat inside a hot oven at an ocean depth of 900 meters. It rains sulfuric acid on Venus but the rains never reach the surface because the extreme heat evaporates the rain as it falls through the sky. These probes were able to relay information to their orbiting satellite counterparts for about an hour before radio contact was lost.

Images returned by Venera 13 and 14 are somewhat more impressive but they are still just a mere glimpse of the Venetian surface. The later probes returned colour images.
Posted by Jeff at 12:00 AM 2 comments:

The UPAEP, Unión Postal de las Américas, España y Portugal or the Postal Union of the Americas, Spain and Portugal, is similar to PostEurope and just like the Europa series of stamps, the UPAEP has it's own annual joint series that several member nations participate in. In 2011 the common theme was the mailbox. These are the only two examples I have from that series: a pair from Uruguay and a pair from Argentina. I like this series and I plan to add more to my collection. 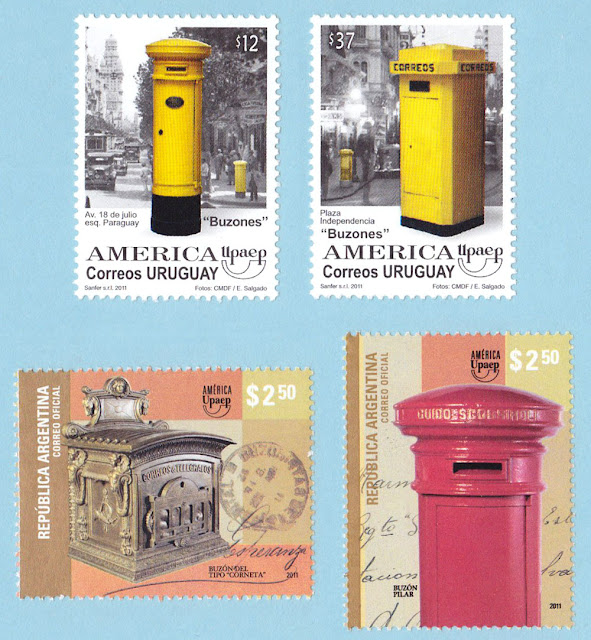 This is a prepaid Canadian postcard that was issued as part of this years definitive series "Canadian Pride". The Canadian Coast Guard icebreaker Louis S. St-Laurent is the flag ship of the Canadian Coast Guard fleet. But it is an old vessel, built in 1969. It underwent a massive 5 year retrofit between 1988 and 1993 and is scheduled to be decommissioned in 2017. Canadians have always had a hard time spending money on things like icebreakers and helicopters. But recently, thanks to the National Shipbuilding Procurement Strategy, there is a plan for replacing the Louis S. St-Laurent as well as 30 other Navy and Coast Guard vessels. 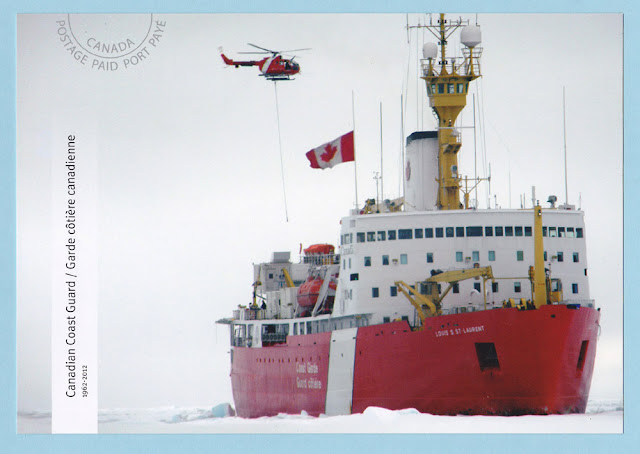 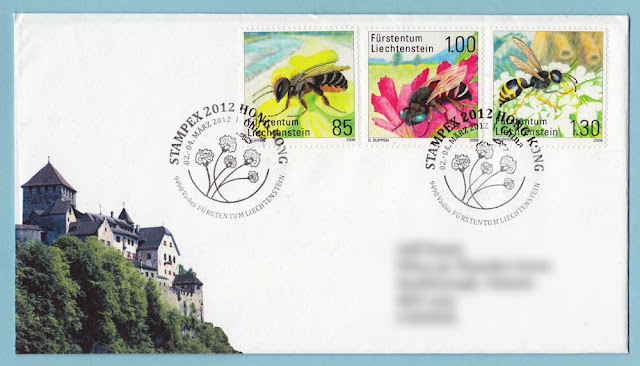 Email ThisBlogThis!Share to TwitterShare to FacebookShare to Pinterest
Labels: Liechtenstein

I prepared this cover last November and received it this past week. I used the Juan de Nova 'air accident' stamps that were issued in January of 2011. The stamps depict a historical event which at first I didn't see as very significant but after a bit of web searching and reading I've come to realize this isn't the case. 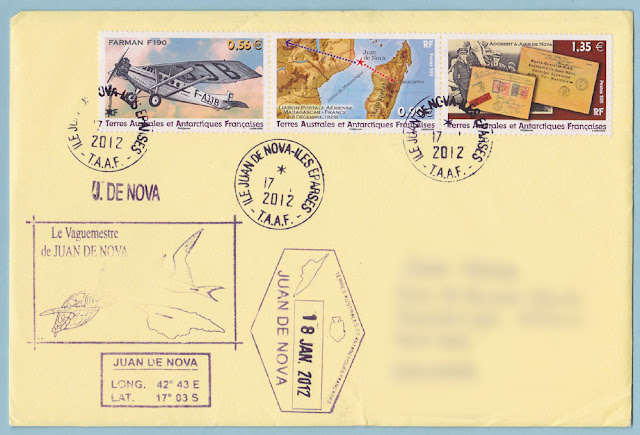 One website documented the event commemorated by the stamps quite well and here is my summary of the information:

On Dec 8, 1929, Captain Marcel Goulette along with pilot Rene Marchesseau and mechanic Jean Michel Bourgeois set out in Goulette's Farman F-192 from Ivato, Madasgar to Quelimane, Mozambique. This was the start of their return journey to Paris from Reunion: a journey that started in Paris on 17 Oct 1927. They left Ivato at 1AM and after a few hours of flight, Marchesseau noticed fuel leaking from the plane. Specifically, he felt it sloshing around his feet. Perhaps this had something to do with the engine replacement the plane had undergone in Ivato. Fortunately, the island of Juan de Nova was near by. They circled for a time looking for a suitable place to land before eventually bringing the plane in for a safe landing shortly after 4AM. During landing the plane sustained damage to its skin and needed repairs. A couple of days later, Marchesseau and Goulette boarded a steamer sent to assist them and set off to locate parts to repair the plane. Bourgeois remained on the island to tend the plane and clear a proper airstrip. He was not alone on the island as during that time the island was inhabited, mainly by workers mining Guano for export. On 28 Jan Marchesseau and Goulette returned with parts and fuel and they spent the next 3 days repairing the plane. After 54 days on the island the F-JAAB took flight once more, leaving Juan de Nova on 1 Feb, 1930.

So why produce a set of stamps to commemorate what seems like such a minor event? For one, it was the first time a plane had landed on the island. From a philatelic point of view, the mail being carried aboard the F-AJJB became "rare" once it landed on Juan de Nova (aboard the first plane to land on the island) and had to be transferred to a steamer to continue its journey by sea. Also, the event itself was part of a much larger more significant journey that was a part of early French aviation history. This was the first flight from Paris to Reunion. A monument was even erected in Reunion to commemorate their arrival. The F-JAAB never made it back to France. A sandstorm in the Sahara forced the crew to ditch the plane on 22 April 1930 and the three men had to be rescued from the desert. Today, another F-192 (No 4) sits in the French Air and Space museum, repainted to match the F-JAAB (No 3). There is a monument at Juan de Nova, commemorating the renaming of the Juan de Nova airstrip to "Goulette-Marchesseau-Bourgeois" on 23 Dec 2010, around the same time the stamps were issued.

Received this commemorate IPY cover from Germany today (thank you Martin). This was a pre-paid envelope produced in 2008. 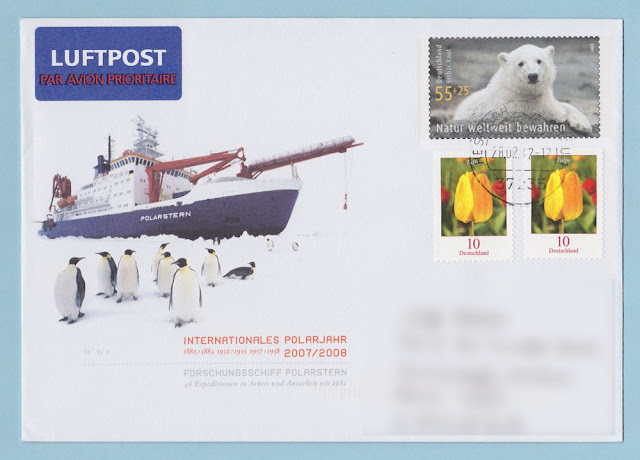