I'm not a huge fan of maximum cards but sometimes, with the right combination of stamp, cancel and postcard, they look alright. While looking through some of the commemorative cancels available in Canada I came across one from Carcross YT for the White Pass 'Golden Spike'. The White Pass is a rail line that runs from Skagway Alaska to Whitehorse Yukon. Although Carcross lies about 2/3 of the way from Skagway, the last spike or 'Golden Spike' was driven here 29 July 1900. The cancel on this card commemorates the 100th anniversary of the event.

I found this postcard which apparently is of a locomotive traveling on the White Pass line. Finding a suitable stamp wasn't easy and it never seems to be really. I wish Canada Post would put out nice generic 'Canadiana' definitives that just have a flag or maple leaf on them. These days it's all about flowers and flags over mills and such. Anyhow, the Red Fox stamp from the recent Wildlife Photography booklet seemed to be a good choice since their range does extend that far north.

The post master in Carcross did an excellent job getting the cancel on the card for me. No smudging and well placed. I've received a few covered from Carcross and the cancels always turn out looking great. 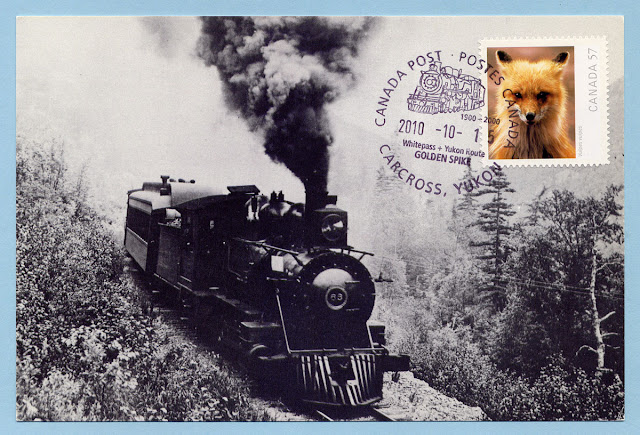 On October 19, Canada Post issued a new series of low value definitives to extend the existing series of low value stamps depicting beneficial insects. This time the values are 4,6,7,8 and 9 cents showing the paper wasp, assassin bug, large milkweed bug, margined leatherwing and the dogbane beetle respectively. As with the first series, these are available together on a limited run souvenir sheet (400k) and also 5000 uncut press sheets. Each uncut sheet has full panes of each value. But unlike the previous issue, these sheets are not signed or numbered.

I received this back from the the MET station on Hopen Island. Hopen is part of the Svalbard archipelago. The Norwegian Meteorological Institute has had a weather station operating on the island since 1948. The station is manned with a staff of four in six month rotations with the Coast Guard resupplying the station twice a year, usually n July and September. This cover was cancelled on September 16. 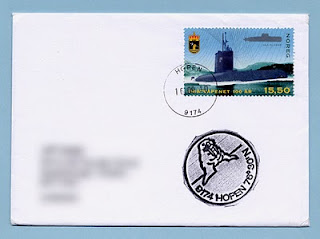 This TAAF stamp is being issued to coincided with the stamp show to be held at "Espace Champerret" in Paris 4 to 7 November 2010. What's interesting about this stamp is that it will be issued in perforated and self-adhesive formats. Both in sheets of 10 stamps. This will be the first self-adhesive TAAF stamp.

Hay River is a community of 3500 in the Northwest Territories on the south shore of Great Slave Lake. 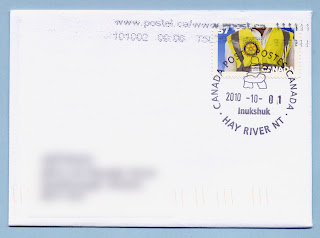