This is a cancellation I recently received from Barry’s Bay Ontario. The stamp is the Canadian “First Flight” stamp issued on 23 February 2009. It commemorates the first flight of the Silver Dart on 23 February 1909 at Baddeck Bay in Nova Scotia. It was the first controlled powered flight in the British Empire.

The cancellation was made by the Barry’s Bay Post Office. The CF-105 Arrow was a delta winged fighter jet developed in Canada by Avro Aircraft Limited between 1953 and 1959. Janusz Żurakowski, a Polish born fighter/test pilot, was the chief development test pilot for Avro at the time. He was the first to pilot the CF-105 and several of its variants before the program was abruptly cancelled. He retired with his family to Barry’s Bay Ontario and lived there until his death in 2004.

A park in Barry’s Bay named after Janusz Żurakowski is also home to the 1/3 scale CF-105 Arrow monument featured on this cancellation. 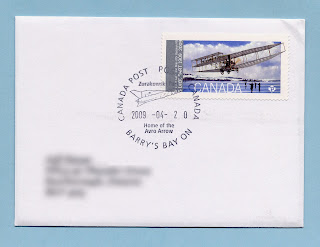