This is a cover I received back from the Ross Dependency the other day. I sent it down there around the end of November and it came back in fairly quick time considering the time of year. It was also wrapped in plastic so it came though the postal system nice and fresh. 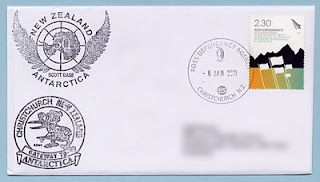 Mail hasn't been processed at the Scott Base on the continent since 1987. All mail to and from the base is handled by the Dependency post office in Christchurch New Zealand, hence the Christchurch cancel on this cover.
Posted by Jeff at 12:48 PM

Hey, how did you get this Cachet cancllation of Ross Cover.

When sent email to them they just said they do only postal cancellation for Ross at Christchurch Agency.

All mail to the Ross Dependency is processed through Christchurch and this cover was cancelled there also. They apply the cachet stamps there too.