Received this cover the other day from the Philatelic Center in Tasiilaq, Greenland. It was cancelled at "Frimærkeforum 2009" in Roskilde Denmark, back on 8 Novemebr 2009. Took a surprisingly long time to get back here but was in pretty good shape. 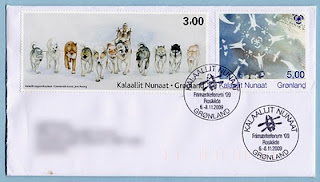 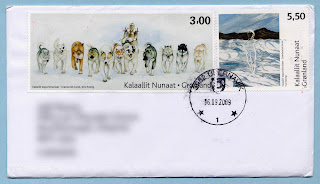 His daughter Ina is also an artist and one of her designs was used in the second Greenland Contemporary Art series. I put these two stamps on another cover that I sent to Upernavik for cancellation. At the time I did not realize who had designed these two stamps but if I had recognized the connection and significance sooner I might have prepared more covers with these beautiful stamps on them.
Posted by Jeff at 2:09 PM