This cover came back to me recently from Casey Station in the Australian Antarctic Territory. The Aurora Australis arrived at Casey on 18 Dec 2009 (8AM), the same day the cover was cancelled. I’m guessing the cover came back on a plane from Casey as this station is serviced by a number of flights that use the nearby Wilkins Runway. ANARE stands for Australian National Antarctic Research Expeditions which have been ongoing since 1947, making 2010 the 63rd year of Australian research expeditions in the Antarctic. 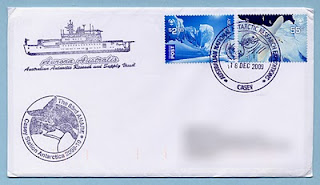