Prudhoe Bay (70°19N 148°42W) is a community on the Alaskan North Slope at the end of the Dalton Highway. If you've ever seen the television series "Ice Road Truckers", you've likely seen or at least heard of Prudhoe Bay. Most of the population works at the nearby oil field and only a few people actually live there permanently. A number of businesses that support the oil field, including the General Store that houses the Post Office, are clustered near the airport in what used to be known as the town of Deadhorse. Despite the name, I somehow doubt there have ever been horses in Deadhorse, dead or alive. There is a good article about the name Deadhorse here. Even though the area was renamed to Prudhoe Bay in the 80's, the name Deadhorse persists today. 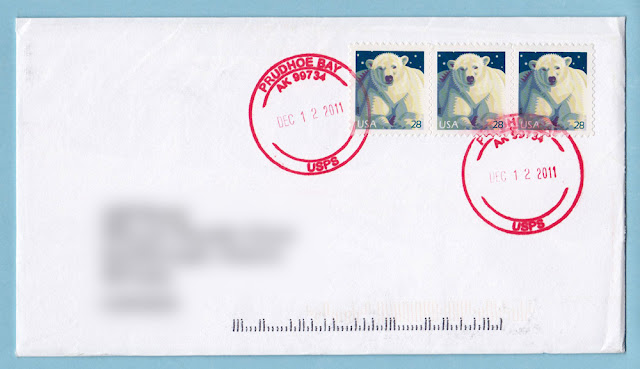 Email ThisBlogThis!Share to TwitterShare to FacebookShare to Pinterest
Labels: Alaska