This year is the birth bicentennial of Charles Darwin. He was born 12 Feb 1809 and several postal administrations have issued stamps to commemorate the occasion. This is also the 150th anniversary of his work “On the Origin of the Species” which first went on sale in November of 1859. It’s interesting to note that the concept of natural selection which is commonly accepted today as… common sense, was considered highly controversial when first proposed by Darwin.

On 23 April 2009, the Falkland Islands issued this beautiful commemorative set. It honors Darwin and his visit to the Falklands in 1833 and 1834 during his famous world-wide scientific expedition aboard the HMS Beagle. I didn’t think much of this set until I saw it against the blue background. Very well done. 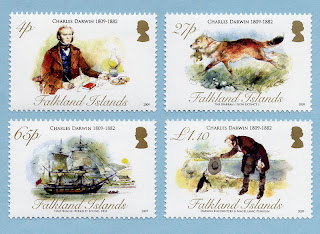 List of all stamps issued around the world to commemorate both the 200th Anniversary or bicentenary of the birth of the greatest naturalist in history, Charles Robert Darwin, and the 150th Anniversary of the publication of his most famous work On the Origin of Species by Means of Natural Selection:
http://www.paleophilatelie.eu/year/darwin_200.html