Butterflies and Landscapes of Liechtenstein

The Butterflies set was issued 9 September 2009 and is the first stamp issue designed and produced entirely in Liechtenstein. When I received these stamps I figured the must have been printed on heavier paper. But they came with an insert that explained how to remove the stamps from the backing paper which refreshed my memory – these are self-adhesive. Unlike any perforated self-adhesive issues I’ve encountered, these separated from one another with ease. However there is no split across the backing paper so freeing individual stamps once separated from a stamp pane may be difficult. 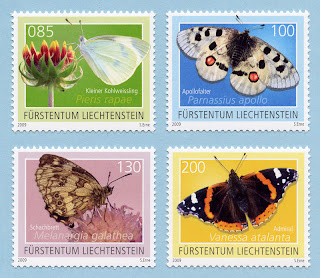 16 September 2009 also saw the release of the second SEPAC issue from Liechtenstein. The new issue resembles the first SEPAC issue in size, theme and value (1.30 CHF). The new stamp features the Chapel of St. Mamerta in Triesen. 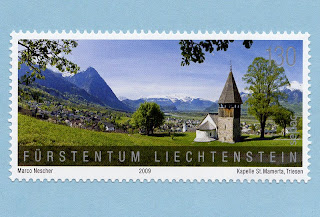