On 17 January 2009, New Zealand Post sent 2500 Ross Dependency 2008 British Antarctic Expedition FDCs on a flight over the South Magnetic Pole. It was a commemorative flight, marking the 100th anniversary of the discovery of the South Magnetic Pole by Douglas Mawson, Edgeworth David, and Alistair Mackay. However there is some doubt that they actually found the correct location. 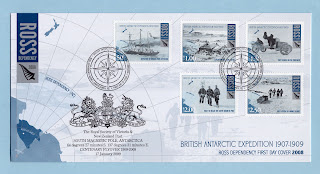 The occasion is marked on the FDC with a special cachet on the lower left. The stamp series on this envelope was issued 5 November 2008 to mark the anniversary of Shackleton's Nimrod Expedition: the British Antarctic Expedition. The $2 stamp in this series commemorates Mawson, David, and Mackay's discovery of the South Magnetic Pole.

I think a little more could have been done to make the cover special. Perhaps having them individually numbered would have been enough. It's a nice cachet - well done. But it's a first day cover for a stamp series that was issued 5 November 2008. I think it would have been more significant if the stamps had been cancelled on the day of the flight instead. Even so, it is a nice FDC and will find a good home in my collection.
Posted by Jeff at 10:50 PM