Iceland Post has released their issue for the 2009 Preserve the Polar Regions and Glaciers joint issue. What's interesting about this sheet is the use of a thermally sensitive ink to mark the extent of the current Northern polar ice cap as it is today. But when heated to a temperature equivalent to body temperature, the red lines fade to show where the ice cap will remain in 2100. The sad reality is that the ice will likely melt much faster than predicted. A more complete image would have also shown the shorelines receding as the ice metls and the water levels rise. 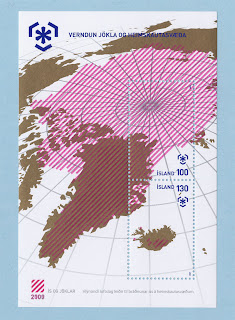