The winter games are coming to Vancouver next year. I would love to have the time and money to go and take in a few events but the kids are a little too young to get much out of it. Besides, I think going to see the games in a "foreign" country would make for a more exciting experience.

The Royal Canadian Mint has been cranking out coins to celebrate the event for the past year and a half and we're still a year away from the event. Fortunately Canada Post has exercised a little more restraint and only recently started to produce stamps commemorating the event.

Recently, they have been producing souvenir sheets of definitive stamps which I think is a nice way to introduce definitives into the collections of those who would otherwise shy away from them. It also means stamps that would normally be available only as adhesives in booklets and rolls are now available in a gummed and perforated format. I'm sure in the future, used version of these gummed stamps, even though they are definitives, will be worth much more than their self adhesive cousins. 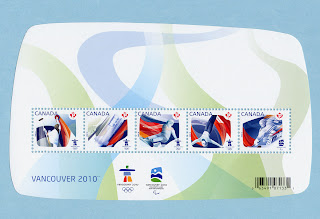 The first sheet released by Canada Post on 12 January 2009 was the "Sports of the 2010 Olympic Games". The 5 Permanent domestic rate stamps on this sheet are also available as self adhesives in booklets of 10 and 30. The stamps feature images representing 5 of the Winter Olympic Games: ice sledge hockey, snowboarding, freestyle skiing, bobsleigh and Curling. 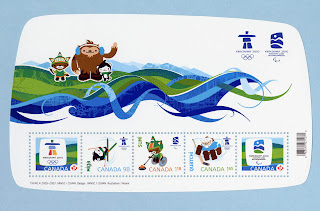 The second sheet released on 12 February 2009 was the "Vancouver 2010 Winter Games Mascots and Emblems". The five stamps in this sheet include a pair of Permanent domestic rates stamps features the Vancouver 2010 Olympic Winter Games emblem and the Vancouver 2010 Paralympic Winter Games emblem. The three mascots of the games, Miga, Quatchi and Sumi, are also featured on the US, International and Oversized rate stamps respectively. These stamps are available in rolls and booklets in the adhesive format.
The release of this sheet was delayed to coincide with the one year countdown and release of the $1.15 Oversized stamp that features the mascot of the Paralympic Games, Sumi.
Posted by Jeff at 12:28 PM