The Battle of Ridgeway took place 2 June 1866. The Fenian Brotherhood in the United States felt they could cause trouble in Canada and use that as leverage to force the UK into negotiations for Irish independence. About 700 Fenian insurgents crossed the Niagara river near Fort Erie and were confronted by Canadian forces just outside the current-day village of Ridgeway. The Fenians won the battle but as reinforcements flooded into the area they were forced to retreat back across the river where they were apprehended by US authorities. 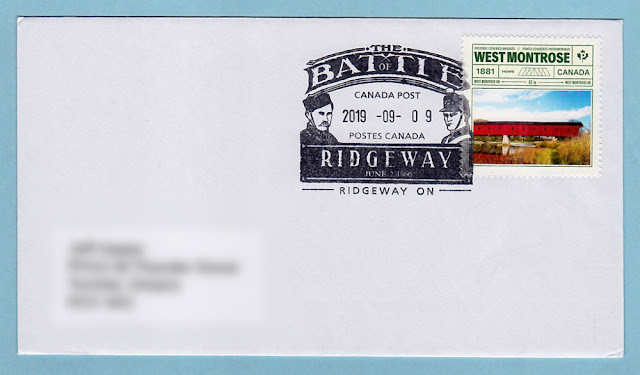 On the back of this envelope is a postmark showing the Point Abino Lighthouse. This is a short distance south-west of Ridgeway on Lake Erie at the southern tip of the Point Abino peninsula. The interesting thing about this lighthouse, other than its Greek revival architecture, is the fact that it's built on the water. Only when water levels are low on the lake, or when it freezes, can you walk out to the lighthouse without getting wet. The land on Point Abino is private and controlled by a home owners association who negotiated that the lighthouse not be directly accessible over land when it was built in 1917. Road access on the peninsula is also restricted but registered guests are allowed to walk to the shore by the lighthouse during the summer months. 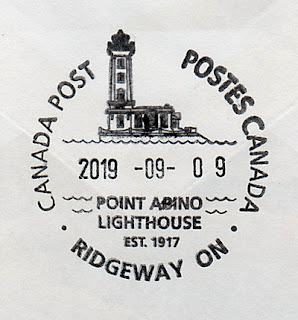