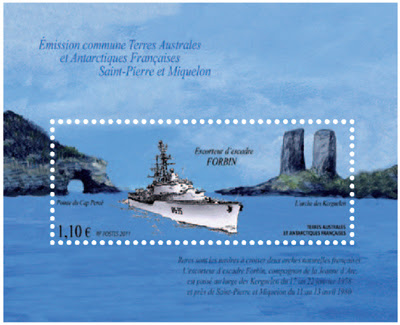 Both issues are 1.10€ and apart from the names of the territories on the stamps and the order of the names on the sheet, the two issues appear identical. 70,000 sheets for the TAAF issue and 64,000 for the SP&M issue. The fact that the rate is 1.10€ makes me wonder if TAAF postal rates for international small letters has increased from 1.00€.
Posted by Jeff at 11:33 PM

The TAAF postal rates have not increased! 1,10€ is the rate for a local letter from 250g to 500g in Saint-Pierre and Miquelon. Have a look at http://www.lapostespm.net/fr/4-tarifs-courrier.html. 1,10€ is not a rate for the TAAF! This face value has been choosen to be the same for the 2 souvenir sheets.