Preseve the Polar Regions and Glaciers beyond 2009

Just when you thought it was over... At the end of 2009, India issued what I thought would be the last issue of this series. But in November of 2010, Uzbekistan issued a single stamp with the crystal logo on it. And then early in 2011, Serbia issued a small stamp sheet with a pair of stamps also baring the crystal logo. The most recent (that I have seen) is this pair of stamps from Belarus. issued on 11 February 2011. What I like most about these stamps isn't so much the stamp issue itself, but the phlatelic website for the Repiblic of Belarus. Some detailed information about these stamps can be found there. 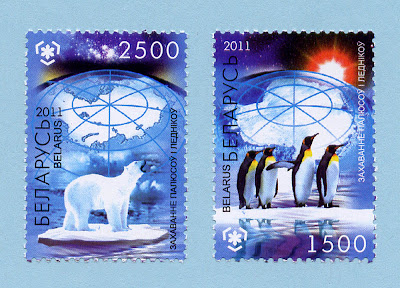